Got an old PC? Age of Empires 4 will probably be playable on it

Age of Empires 4 is designed to run on a wide range of gaming PCs, making the long-running series accessible to newcomers and series veterans alike, even if they haven't updated their PCs for a while.

Microsoft expects 50% of Age of Empires 4's playerbase to be using machines that will be playing the game using its "low spec renderer", highlighting why the game has been designed with lower-end hardware in mind.

Whether you are gaming on a laptop with integrated graphics or a high-end gaming PC with all of the latest hardware, Age of Empires 4 should be playable on your system. On PC, the game will be available on Steam, the Microsoft Store, and through Xbox Game Pass for PC.

Made with Accessibility in mind

Age of Empires is a niche franchise, making it an ideal add-on for Xbox Game Pass for PC. With Xbox Game Pass, Age of Empires 4 is available at a highly affordable price, and with such low system requirements, PC gamers have little reason not to try out Microsoft's latest RTS.

Below are Microsoft's finalised PC system requirements for Age of Empires 4. 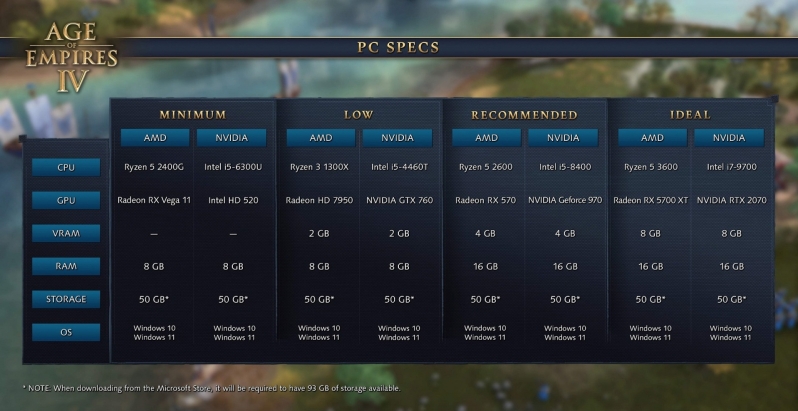 You can join the discussion on Age of Empires 4's finalised PC system requirements on the OC3D Forums.