AMD confirms that they will be attending Gamescom 2022

AMD's hoping to deepen their relationships with game developers

AMD's returning to Gamescom, but don't expect to see new CPU/GPU reveals there

AMD has confirmed that they are attending Gamescom 2022, bringing their staff over to Cologne Germany to deepen their relationships with game developers.

Currently, we do not expect AMD to make any major hardware announcements at Gamescom, be it from their Ryzen or Radeon camps. That said, AMD could give gamers a glimpse at how they interact with developers, and reveal new gaming partnerships. While graphics cards have been revealed at or around Gamescom before, like Nvidia's RTX 20 series in 2018, AMD has not hinted at any specific reveals or showcases at Gamescom. This leads us to believe that AMD's prescience there is primarily focused on developer relations.

AMD's is currently rumoured to be hosting a Ryzen focused event on August 29th, where the company is expected to showcase their Ryzen 7000 series of processors. This event comes after the end of Gamescom 2022, which means that we should not expect any discussion of AMD's Zen 4 Ryzen CPUs at Gamescom. 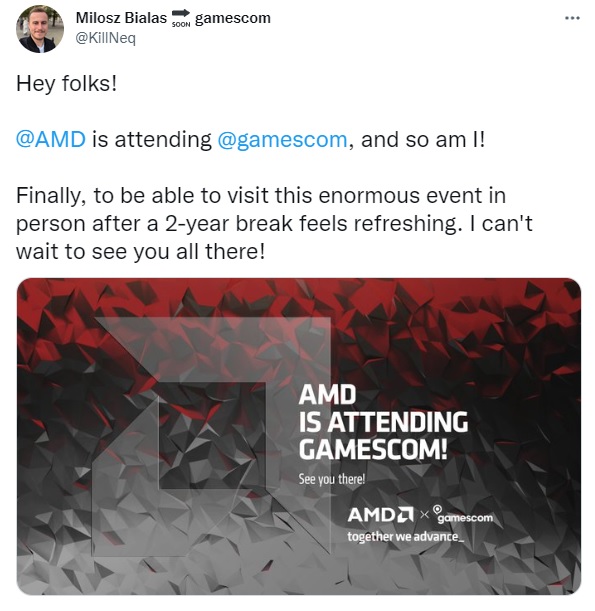 You can join the discussion on AMD's attendance at Gamecom 2022 on the OC3D Forums.