Does Nvidia need to try harder with its game bundles?

In case you haven't noticed, graphics cards are now readily available at retailers. GPU pricing has plummeted, and demand from cryptocurrency miners has evaporated. Today, graphics card manufacturers need to encourage gamers to buy their products, resulting in lower prices and the re-introduction of game bundles.

On the AMD side, we have AMD's newest iteration of their "Raise The Game" bundle, which offers gamers up to three titles with high-end graphics cards and fewer games with their lower end products. On the Nvidia side, we have their "Face Your Demons" a bundle that is exclusive to Nvidia's high-end products and only includes two games (plus two pieces of DLC).

With their latest Raise The Game bundle, AMD's offering their customers newer games, with Sniper Elite 5 having launched this May while Saints Row, and Forespoken remain unreleased. In contrast, Nvidia's bundle includes DOOM Eternal, a game from March 2020, and Ghostwire: Tokyo, a more niche game from March this year. AMD's bundle is very forward looking, but Nvidia's mostly offers games that were heavily discounted during Steam's Summer Sale.

Only AMD has low for low-end GPU purchases

Nvidia's Face Your Demons bundle is only available to purchases of RTX 3080 or higher graphics cards. In contrast, even purchasers of AMD's sub-£150 RX 6400 can get a free game. Yes, AMD's lower-tier GPUs come with fewer free games, but everything above AMD's RX 6700 get access to the full bundle, and everything above the RX 6600 gets free pre-orders for two unreleased AAA games.

Right now, Nvidia's offering nothing to their lower-end customers, and that because they are currently focused on shifting their high-end GPU stock ahead of their RTX 40 series product launch. 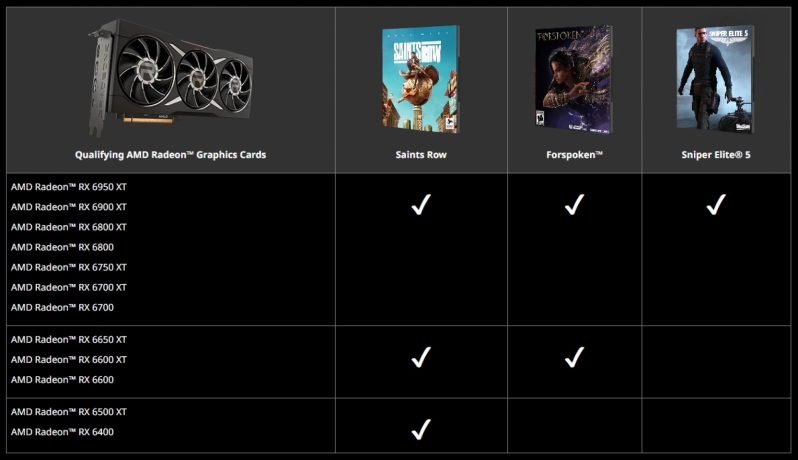 In general, support for DLSS and strong ray tracing performance gives Nvidia's RTX 30 series graphics cards a clear advantage over their Radeon counterparts. That said, it is a shame to see Nvidia so blatantly focus exclusively on their high-end consumer base,

It is arguable that AMD are offering lower-tier game bundles with their graphics cards to make them more competitive with their Nvidia-based rivals. As it stands, DLSS and ray tracing a strong reasons to consider Nvidia GPUs over their AMD counterparts, and AMD's game bundle should only be seen as a good deal if you are interested in their bundled games. If not, most consumers would prefer a simple price decrease instead of a free game. 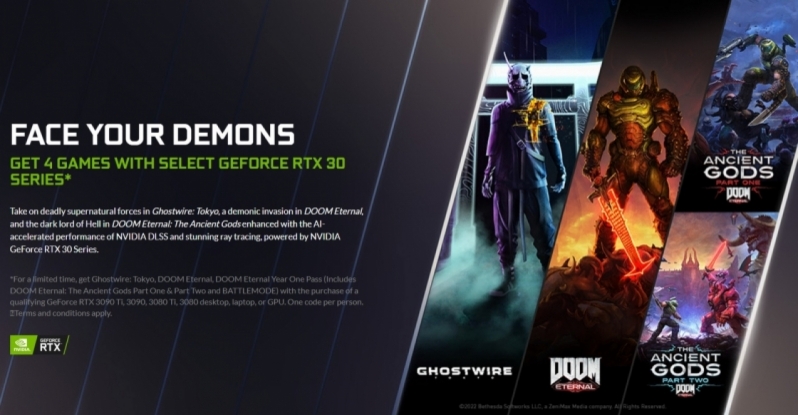 I don't know about you, but when a company says that their game bundle is worth £££, my immediate thought is that I would prefer that value as a discount. Yes, that isn't how things work (as AMD/Nvidia do not pay full price for bundled games etc), but my general opinion is that I often prefer lower prices than bundled games, especially if bundled games are not new AAA releases.

Nvidia's "Face Your Demons" bundle does not appeal to me. I already own DOOM Eternal and Ghostwire: Tokyo is simply not appealing to me. As it stands, I think that AMD has the stronger game bundle, both because of its bundled games and the fact that it applies to both high-end and low-end graphics cards from AMD's RX 6000 series product stack. If Nvidia wants to use bundles to shift its excess RTX 30 series stock, they will need a better game bundle.

Ultimately, the purpose of GPU game bundles is to help sell graphics card, both by giving something for manufacturers to market and by giving customers additional value in the form of "free" gaming content. If companies like AMD and Nvidia can sell more GPU stock, they have succeeded. If stock remains on store shelves, they need to either lower prices, or offer more add-ons (perhaps both).

You can join the discussion on the game bundle wars on the OC3D Forums.

meuvoy
Hardly so, I for one don't really care about those games some are kinda interesting but I have no plans to play them... Earning them with a GPU purchase would probably only result in them taking up space in my steam library as 90% of all other free games I earned do. To this date I've claimed almost all games Epic has given away but only played about 3 or 4...Quote

AlienALX
It matters to my pals. We play Sniper a lot in VS mode and we're all due S5. When you consider it's £30-£40? yeah that's a decent saving. Nvidia are giving away games that are old.Quote

meuvoy
Quote:
Yes you and your pals are the kind of people they are hoping to reach. But statistically there will be way more people looking to buy a GPU and not caring about the 3 games that come with it thsn people that do. Unless they have a very hot game in there, like if they were bundling a cyberpunk key back when it was the hot game, but that's probably never gonna happen. Plus there will be plenty who are interested but already have a shiny new GPU.

Sue it's still a value-add and I definitely rather have them bundled than not bundled but I would never buy a GPU because there's a specific game coming with it, I'd just buy the best GPU for me, whatever comes along in the box is just a nice surprise. I don't think anyone is like, okay the amd card is 5% slower but it's the same price, but it comes with a game that it's price would represent 6% and thus now it's a better value than NVIDIA's so I'll buy AMD. Unless said person does want the game and still doesn't have it. Which is weird.

Instead people are: okay I'm content creator I need CUDA so not AMD.
Or: I'll be playing only raster games in 4k and AMD has better raster performance plus infinity cache gives them an edge in 4k so not NVIDIA. (theoretical cases)Quote
Reply