AMD relaunches GPUOpen with a suite of new FidelityFX tools

Open Source effects for the masses. More are coming!

AMD relaunches GPUOpen with a suite of new FidelityFX tools

AMD has relaunched its GPUOpen initiative, moving the company's Open Source developer toolsets into the next generation with a series of SDKs and effects which are ideal for use with DirectX12/Vulkan-based games and RDNA series graphics cards.

This week, AMD plans to reveal new GPU Open tools every day, and that starts with FidelityFX, AMD's open-source shader-based effects. Until now, AMD's FidelityFX brand has been associated exclusively with AMD's Contrast Adaptive Sharpening technology, but now the name will mean a lot more to game developers.

One of the major benefits of AMD's new FidelityFX lineup of feature is that its Open Source nature will allow developers to easily integrate modify and expand AMD's toolset to better suit their games. Thanks to the open-source nature of FidelityFX, developers can also look at AMD's documentation and use it to create their own implementations, allowing FidelityFX to inspire the creation of more developer tools. 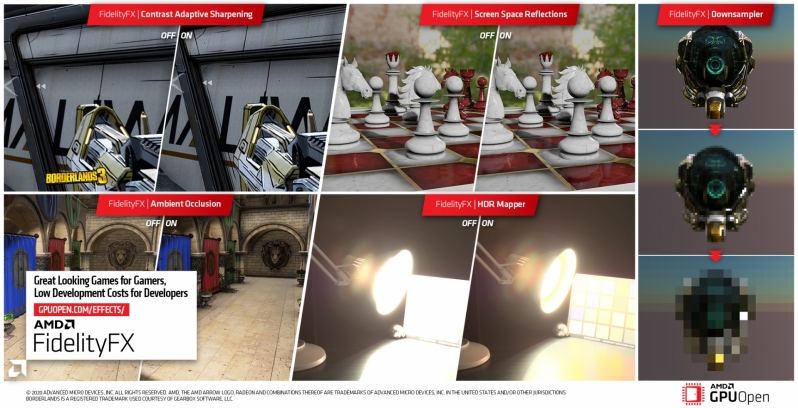 With Stochastic Screen Space Reflections (SSSR), AMD hopes to allow developers to enable screen space reflections in a manner which is more performance efficient than traditional SSR techniques. AMD then combines this lower-cost SSR toolset with a high-quality denoiser to enable SSR in a way that is highly optimised for AMD's RDNA and enables higher framerates.

Below is what AMD has to say about Stochastic Screen Space Reflections;

The term “Screen Space Reflections” describes an effect that can create realistic looking reflections purely based on information already present in the rendered image. The underlying algorithm shoots reflection rays from a depth imprint of the rendered scene (a so called “depth buffer”) and follows them in constant steps through the image until these rays intersect with the depth buffer again. Instead of taking constant sized steps, FidelityFX SSSR builds on an industry-leading algorithm that searches the rendered image in a hierarchical manner. This allows for larger and fewer steps on average, increasing performance of the search and quality of the final image.

To support glossy reflections, this FidelityFX effect jitters the reflection rays to create the sense of surfaces with varying roughness. However, that approach inherently introduces noise. Thus, FidelityFX SSSR comes with a high quality denoiser specifically optimized for the RDNA architecture. The denoiser combines the results from multiple frames to create a noise-free image. Furthermore, it allows to decrease the ray count based on surface roughness thus further speeding up screen space traversal.

You can read more about Stochastic Screen Space Reflections here.

HDR is only going to get more popular as we enter the next generation of console and PC hardware, making it vital for developers to have a toolset which will allow them to integrate HDR into their games without a major performance cost or another downside.

The idea behind AMD's Single Pass Downsampler (SPD) is simple. AMD wants developers to have access to an RDNA-optimised solution which will allow developers to generate up to 12 MIP levels without a huge performance cost.

With this toolset, AMD can speed up texture creation and accelerate a game's post-processing pipeline by reducing Downsampling steps into a single pass. This will allow all mipmap levels to be accessed with a single hardware pass, which is a big deal given how frequently MIP levels are used in modern games.

In most modern games, Ambient Occlusion is a vital effect which can add greatly to a title's realism, grounding rendered images into reality with believable lighting and ambient shadows. The problem with Ambient Occlusion is that it can be very expensive computationally.

With Combine Adaptive Compute Ambient Occlusion (CACAO), AMD has optimised Intel's implementation of ASSAO to offer users higher performance levels and five built-in quality settings. CACAO can also be run at a game's native resolution or using a lower base resolution, which can be upsampled to deliver higher performance levels. As gaming enters the 4K era, performance saving techniques like this will help developers achieve high framerates while maintaining high levels of graphical fidelity.

In 3D graphics, one of the biggest challenges is creating high quality lighting. Calculating physically accurate lighting is too computationally expensive to be done in real time, so instead multiple approximate models are used to create believable lighting.

One of these models is ambient lighting, which models indirect light in a scene. The most naïve ambient light model is to have ambient lighting constant across an entire scene. However, this can be greatly improved by ambient occlusion, in which there is less ambient light in areas with occluding geometry – for example in corners, where objects meet, nooks and crannies etc. This vastly improves believability of a scene and makes a scene easier to visually parse.

On AMD's GPUOpen website, further details about all of these technologies and code samples are available for analysis.

You can join the discussion on AMD's new GPU Open technologies on the OC3D Forums.

NeverBackDown
This was a lot of information tbh. More than expected. If they are doing it everyday all week it'll amount to something pretty impressive for the gaming industry. Let's just hope these features catch on and be improved upon for everyone to benefit.Quote

I wonder if this stuff can be used on the next gen consoles? in which case it is bound to be used surely.Quote

WYP
Quote:
AMD's stuff usually can be integrated into console titles. There's a reason why they are saying optimised for RDNA and not optimised for Radeon. It's basically saying, hey devs that "this is already optimised for the new consoles".Quote

NeverBackDown
Not only that it is Open Source so they could modify it however they see fit for whatever project they want.Quote