Expect FSR 2.0 to arrive on Deathloop first and other games later

FidelityFX Super Resolution 2.0 is coming to Deathloop on May 12th

AMD has given us an update on their progress with FidelityFX Super Resolution (FSR) 2.0 technology, the company's next-generation, open-source upscaling technology.

FSR 2.0 is now due to launch on May 12th with a new update for Arkane Studios' Deathloop, allowing all PC gamers to utilise image upscaling to achieve higher framerate to achieve "similar or better than native" levels of image quality at all resolution. With FSR 2.0, AMD will effectively be giving PC gamers a free performance boost, even if they do not use AMD hardware.

After Deathloop, FSR 2.0 will be coming to a lot of other titles, including EVE Online, Farming Simulator 22, Forespoken, Microsoft Flight Simulator, and Grounded.

The next-generation of the widely adopted AMD open-source, cross-platform upscaling technology, FSR 2.0 helps boost framerates in supported games by using previous frame data to provide similar or better than native image quality at all resolutions. It supports a wide range of graphics products and platforms, including AMD and select competitor solutions, without requiring dedicated machine learning hardware. The first game to add support for AMD FSR 2.0 is DEATHLOOP by Arkane Studios and Bethesda, which is expected to be available via an update on May 12, 2022. Additional games planning to add support for the technology in the coming months include Asterigos, Delysium, EVE Online, Farming Simulator 22, Forspoken, Grounded, Microsoft Flight Simulator, NiShuiHan, Perfect World Remake, Swordsman Remake, and Unknown 9: Awakening.

To oversimplify things, FSR 1.0 and FSR 2.0 use different techniques to upscale games to higher resolution. FSR 1.0 uses a spatial upscaling technique that uses data from a single frame to recreate the image at a higher resolution. With FSR 2.0, temporal data is used to use data from multiple frames to generate an upscaled image. With FSR 2.0, AMD's FidelityFX Super Resolution software includes an optimised form of Temporal AA, allowing the technology to act as both an upscaler and a anti-aliasing solution.

The temporal nature of FSR 2.0 gives AMD more data that they can use to create higher quality image upscales. This results in higher levels of image quality, and the potential for some games to look better than native when upscaled from lower resolutions with FSR 2.0. With FSR 2.0, games can receive a performance boost and a quality boost in some cases, or a performance boost with near native levels of image quality.

With FSR 2.0, AMD will be offering gamers higher levels of image quality than FSR 1.0 at all quality/performance levels. Beyond that, this technology does not require machine learning, which means that FSR 2.0 can be used on all modern graphics cards, even those from AMD's competitors. The cross-platform nature of this technology could also be used to bring this game to games on consoles. 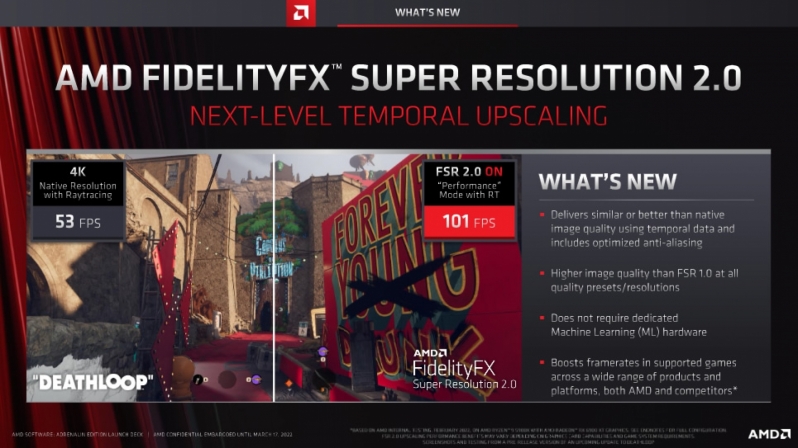 We will be having a look at FSR 2.0 in Deathloop when the feature is added with the game's next patch.

Upscaling, an incredible technology for the 4K, and post-4K, era

Upscaling technologies like FSR 2.0 (AMD), DLSS (Nvidia) and XeSS (Intel) reduce the performance requirements of high resolution gaming. These technologies have their largest impact when gamers try to play the latest games at high resolutions like 4K.

With high quality upscaling, gamers can achieve near-native or better than native levels of image quality while also being able to play their games at higher framerates. This is a clear win-win for gamers, as it allows them to get more out of their hardware. This will be critical when the display market starts moving beyond 4K, where games may be expected to run at absurd resolutions.

With Sony's PlayStation 5 displaying an "8K" logo on its box, it is clear that console games will be making heavy use of image upscaling to support higher resolutions moving forward. The 4K era is here, and upscaling technologies like FSR 2.0 will help pave the way towards a time where 8K gaming is viable.

You can join the discussion on AMD's FSR 2.0 technology on the OC3D Forums.