AMD's ready to give game developers more toys to tinker with

Back in 2016, AMD started its GPUOpen initiative, a direct competitor to Nvidia's GameWorks suite of middleware that's entirely open-source, and allows developers to modify AMD's technologies to suit their games or the needs of specific hardware platforms.

Now, AMD's GPUOpen website is getting revamped. To mark this change, next week, AMD plans to announce new GPU Open releases every day for the next week, giving developers more toys to play with improving AMD's existing technologies.

One of AMD's most famous GPUOpen effects is TressFX, the technology behind Lara Croft's hair in the Crystal Dynamics' Tomb Raider series. Another great GPUOpen technology is FidelityFX, an intelligent image sharpener which has been added to games like Shadow of the Tomb Raider, Borderlands 3, F1 2019, Gears 5 and Rage 2.

With a new generation of Radeon-powered consoles on the horizon, it will be fascinating to see what new technologies AMD has been cooking for its current-generation and future graphics cards. Will they be received as well as FidelityFX, or will they be used by a minority of developers. 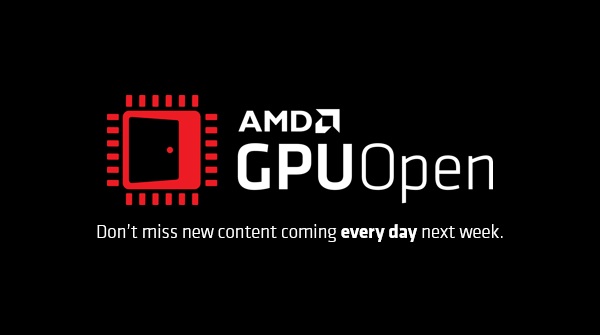 You can join the discussion on AMD's upcoming GPUOpen push on the OC3D Forums.

NeverBackDown
Pretty stupid. This should be a professional announcement given to developers in it's entirety.

They shouldn't be wasting development time. Just using this as an opportunity to promote themselves. They already have the documentation finished, just release it to them.Quote

Dicehunter
Pretty cool, Will be interesting to see what they show us.Quote

WYP
Quote:
When most large games can take years to develop, I don't think staggering announcements across a week will matter in the grand scheme of things.

AMD doesn't have the same clout as Nvidia, so using this to "promote themselves" is a good strategy. Every good technology that AMD announces will get its time in the spotlight and developers will get more opportunities to see that these features exist.

If AMD released this with no fanfare, my guess is that barely anyone would look into it. Some will see the huge information dump and think "when will I have time to read all that". Pre-announce it, and people can set time aside. Stagger the release, and people can digest the information in bite-sized chunks.Quote

NeverBackDown
Well if you're a dev using these technologies you really are going to be reading the entire relevant documentation that you will be using. Bite sized chunks don't really matter. As a Software Engineer you are CONSTANTLY reading stuff. It's just part of the job, at least from my knowledge and field of study.

This is mostly just for consumers and it's nice because it's something to look forward to everyday when all we are doing is staying at home playing games. I just think if I was a dev and I had to wait a week to figure out features coming I'd be pretty annoyed as it's wasting my time.

Now for all I know AMD could have handed out the documentation or provided the resources for devs already and this is just for consumers and to get AMDs name out there. Then my opinion doesn't matter at that point