AMD's next set of Navi GPUs are going to be impressive!

It looks like AMD has multiple variants of its RX 6700 XT in the works, offering their AIB customers two SKUs based on their respective power limits. These GPUs will be used to separate stock/reference designs from premium overclocked variants, offering customers power limits of 189 watts and 230 watts, respectively.

This information comes from a new video from CoreTeks, who have reported that these A and B series ASICs will feature the same core specifications. The A-series ASIC can be used with 189W power limits, while the B-series ASIC will have a 230W power limit. AMD will likely charge more for their A-series ASICs.

CoreTeks also reported that the RX 6700 XT would launch in the third week of may, placing the GPU's release somewhere between March 15th and March 19th. 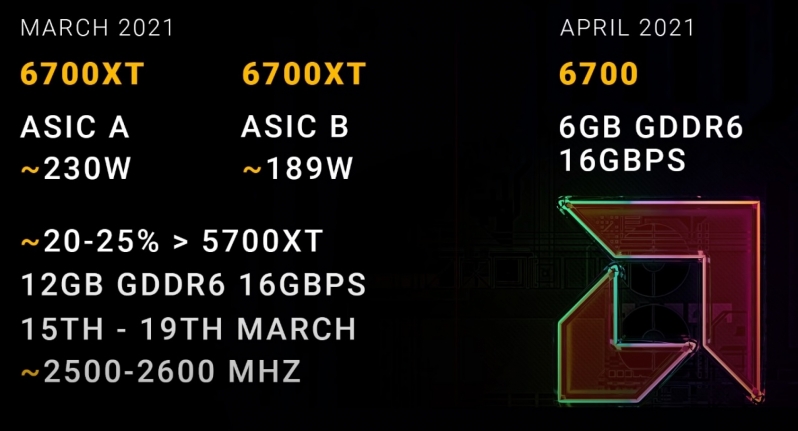 You can join the discussion on AMD's RX 6700 XT graphics card and it's two rumoured variants on the OC3D Forums.

AngryGoldfish
I watched his video. It was good.

I'd be interested in the cheaper variant, because the 6700 with only 6GB is a bit sad, and I don't know when the 660XT is gonna come out. I'm looking to build a compact ITX system with low TDP parts, so the lower power variant interests me. But Coreteks does say that ASIC B is going to be more of a 'media' piece to impress reviewers. ASIC A is the one you'll actually see (theoretically if no mining/supply issues) on the shelves, purchasable, and produced on a large scale, which would be sad as I think RDNA2's biggest draw is its efficiency. They're behind Nvidia in almost everything except efficiency. I want to take advantage of that and get an efficient card and undervolt it to death.Quote
Reply