Why is this happening to a single player game?

Ubisoft has released a statement confirming that Assassin's Creed Liberation HD will remain available and playable on Steam after September first. Below is Ubisoft's official statement on this matter.

As stated in our support article, only DLCs and online features will be affected by the upcoming decommissioning. Current owners of those games will still be able to access, play or redownload them. Our teams are working with our partners to update this information across all storefronts and are also assessing all available options for players who will be impacted when these games’ online services are decommissioned on 1st September, 2022.

"It has always been our intention to do everything in our power to allow those legacy titles to remain available in the best possible conditions for players, and this is what we are working towards.

Ubisoft does not care about game preservation. That's the only conclusion that we can draw based on what's happening to Assassin's Creed Liberation HD. Soon, the PC version of Liberation HD will be unplayable on PC, despite the fact that the game is single player only. Even existing owners of the game will be unable to play it.

In September 2022, Ubisoft will be closing down the servers for many of their legacy titles. This will result in some online-only games becoming unplayable, as they require game servers to operate. In the case of Assassin's Creed Liberation HD, it looks like Ubisoft are not willing to release a game patch to decouple Assassin's Creed Liberty from its servers, resulting in the game becoming unavailable from September 1st.

And like that, a piece of history is lost

Assassin's Creed Liberty is now no longer available for sale on Steam. This change was first spotted by @Nors3 on Twitter, revealing to the world that Ubisoft is making one of its single player only games unavailable to all gamers (even existing owners) due to game server closures. This is unjustifiable, and a slap in the face for all owners of the game.

To make matters even worse, Assassin's Creed Liberation HD was available at a reduced price during Steam's Summer Sale. New owners of the game will need to complete Liberation HD in less than two months, because on September 1st the game will no longer be playable. Hopefully Ubisoft will soon come to their senses and simply patch their game to address whatever issue has caused the game's removal from sale. This should never happen to a single player game. 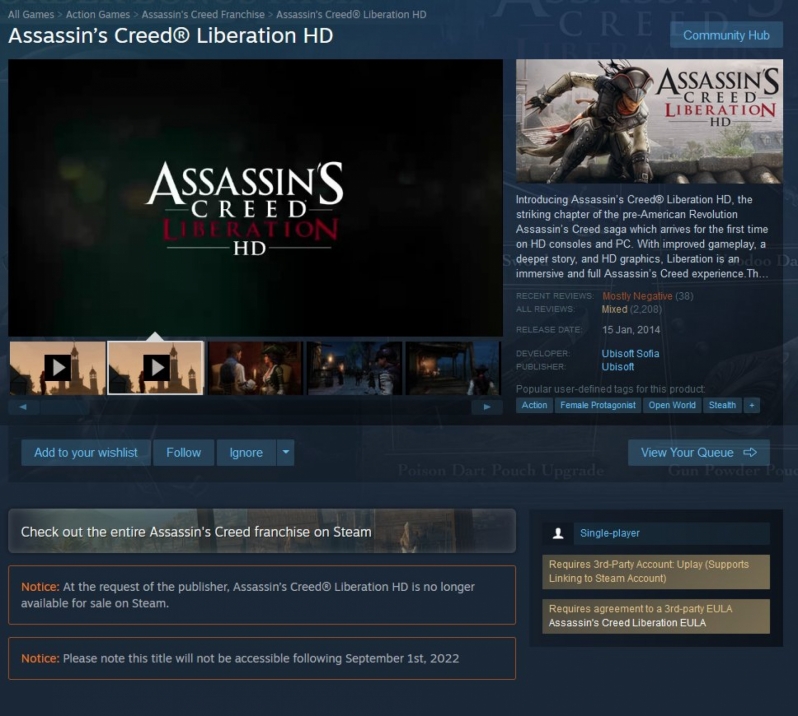 Ubisoft, people paid good money for your game. They least they deserve is the ability to access and play it. There is no good reason why a single player game should be removed from sale like this, especially when a simple patch should address the underlying issue that is causing the game's removal from sale. If its a server issue, simply patch the game to no longer need said servers, this is a single player game after all. If it is due to licensed content, simply remove said content.

If Ubisoft fails to address this issue, they are needlessly tarnishing their reputation. If they fail to make Assassin's Creed Liberation HD playable after September 1st, they will have proven that they do not care about you, their customer, or the legacy of their products.

You can join the discussion on Ubisoft making Assassin's Creed Liberation HD unplayable on the OC3D Forums.

Dicehunter
I've been reading around that apparently it's "only" the Steam versions of games that are being de-listed and removed from peoples Steam library, Still a scummy move but to me it looks like Ubi wants the sole place of AC games to be Uplay.Quote