Ready for some DX12 VS Vulkan Benchmarking?

BasemarkGPU 1.1 is now available to download, revamping the Multi-OS/API benchmark with a new launcher and support for the DirectX 12 API, making DirectX 12 VS Vulkan benchmarking possible.

In version 1.2, Apple's Metal API will be added to the benchmarking suite, enabling iOS/MacOS support, adding to the tool's already extensive list of supported OS' and API. At the time of writing, Basemark GPU is supported on Windows, Android and Linux and can be used with the Vulkan, OpenGL 4.5 and OpenGL ES 3.1 APIs. The Linux version of Basemark GPU 1.1 release on November 29th.

With this release, Basemarks hopes to have addressed the issues which plagued the benchmarking utility's original incarnation, such as the exploits which could be used to generate fraudulent scores and the frequent server issues when the PC gaming masses quickly overloaded Basemark GPU's servers. At this time it is unknown whether or not version 1.1 of the tool will feature improved Vulkan or OpenGL 4.5 implementations, or if the benchmark will deliver identical scores to version 1.0 of the tool.

This benchmark will give us a new opportunity to compare both DirectX 12 and Vulkan on Windows 10 based machines, allowing us to judge which API is the better option when running Basemark. Basemark GPU utilises the Rocksolid engine, which is designed for industrial applications. 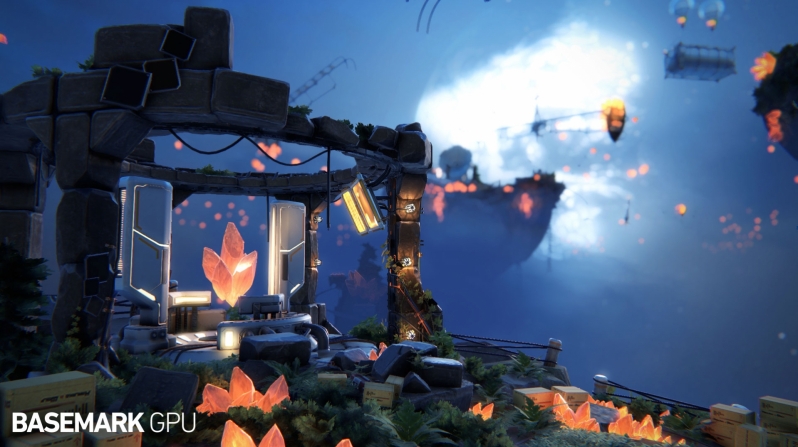 Basemark GPU version 1.1 is available to download here. Basemark offers both Free and Corporate versions of their benchmarking utilities, with their Free version requiring an internet connection to function.

You can join the discussion on Basemark GPU version 1.1 on the OC3D Forums.