Ready to see the next generation of Battlefield?

Play Battlefield 2042 starting October 22, 2021. Fight to define the future in a world transformed by disorder. For the first time in Battlefield’s history, 128 players can join the all-out war at the same time* – giving you the chance to take part in massive-scale battles where anything can happen. Get an even greater sense of spectacular, large-scale war on seven massive maps where you'll experience ever-changing battle conditions and gameplay challenges.

Battlefield 2042 will release on October 23rd, though those who pre-order the game will receive early access to the game. At this time, it is unknown how long this early access mode will last.

Battlefield's premium versions will be required for cross-generation support for console players, allowing Xbox One/PS4 players to upgrade to the game's next-generation version seamlessly. Popular multiplayer modes like Conquest will make a return in Battlefield 2042, though new game modes are coming in the form of the game's "all-new Hazard Zone".

Battlefield 2042 is a first-person shooter that marks the return to the iconic all-out warfare of the franchise. In a near-future world transformed by disorder, adapt and overcome dynamically-changing battlegrounds with the help of your squad and a cutting-edge arsenal.With support for 128 players, Battlefield 2042 brings unprecedented scale on vast battlegrounds across the globe. Players will take on several massive experiences, from updated multiplayer modes like Conquest and Breakthrough to the all-new Hazard Zone.

You can join the discussion on Battlefield 2042 on the OC3D Forums. 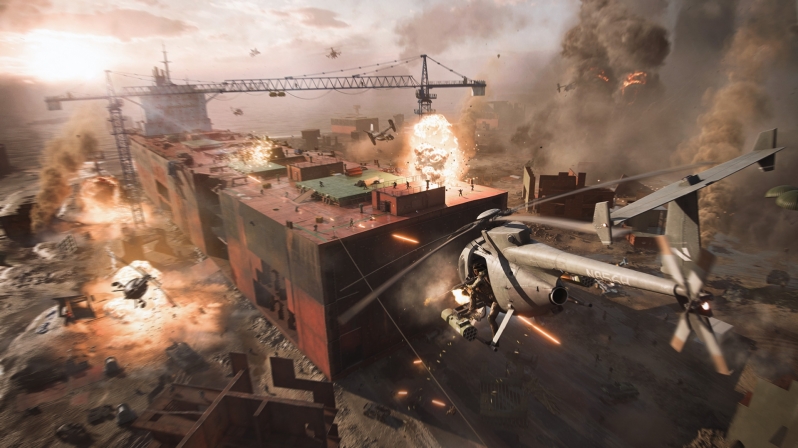 Dawelio
I'm hyped for this game, I absolutely loved Bf3 and this looks absolutely beautiful and like a true next-gen Battlefield game.

I'm also really happy I managed to get an Strix 3080 as well, so I'm definitely set for when it releases

m2geek
Quote:
I've Never played a Battlefield game, not really my genre - but I'll likely be getting this to put MY 3080 to work. The Eyecandy alone is worth my coin, and the weather thing looks insane.Quote

Warchild
Quote:
Don't get your hopes up. If its anything like BF5 for the 20xx series, it will cripple the card with badly optimised degradation. And their solution to fix that was to take out detail in the game.Quote