DICE's implementation of Ray Tracing within Battlefield V is perhaps one of GDC 2018's most spectacular sights, offering realistic reflections, the likes of which have never been seen before within a playable video game.

DICE has also confirmed that their current implementation of Ray Tracing will not function on AMD or Intel graphics cards support for DXR acceleration, as it is currently optimised for Nvidia RTX compatible hardware, with certain features being dependant on Nvidia's compiler. This will be addressed in the future as other more manufacturers create graphics cards that support DXR/Ray Tracing acceleration, as DICE can re-tune their Ray Tracing implementation to support Nvidia's competitors.

Even with the DXR API, DICE cannot optimise their games for hardware they have never seen or used, making it difficult to support Ray Tracing across multiple hardware platforms out of the gate. DICE is willing to re-optimise their DXR implementation when AMD creates compatible graphics hardware. 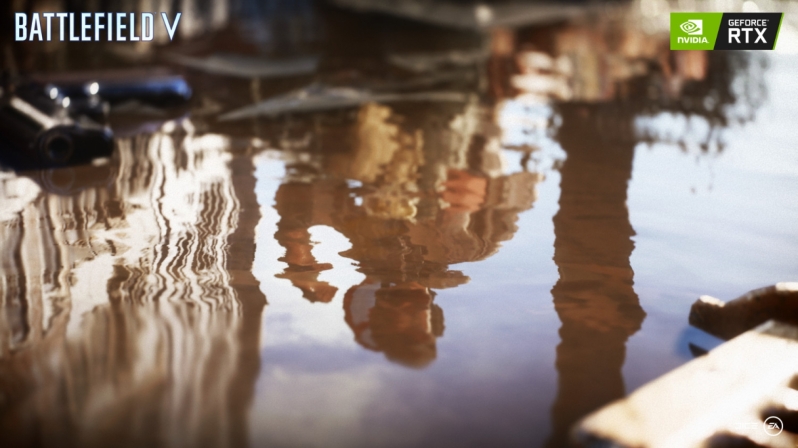 Right now, Nvidia is the only hardware manufacturer that sells graphics cards with dedicated Ray Tracing hardware, making it impossible for developers to optimise their in-game Ray Tracing elements for anything else. This is the beginning of the industry's journey into real-time Ray Tracing, which will no doubt have its own set of bumps and turns further down the road.

You can join the discussion on Battlefield V's Ray Tracing tech being exclusive to Nvidia RTX products on the OC3D Forums.

Dicehunter
I usually get excited for new tech but I have never been so unexcited in my life especially as it's all about reflections, Shadows and lights

AlienALX
Cows moo. Did you know that?

haha, not being sarky toward you Mark just having a laugh.Quote

Chopper3
Quote:
I couldn't agree more, how is this news in any way?Quote

looz
Because DXR is not vendor specific.Quote

SPS
Quote:
This is the most exciting tech in years for me.