Something new is coming from Nvidia

Nvidia's DLSS technology is a powerful upscaling tool, allowing PC gamers to generate images that are close to, and sometimes better, than native resolution renders while delivering significant boosts to game performance.

While the performance-boosting nature of DLSS is a major benefit, what about games that do not require a performance boost? Can DLSS be used to deliver higher quality images without the technology's upscaling component? If DLSS can deliver excellent faux-K images using sub-4K pixel counts, what happens when DLSS starts with 4K images? What happens when DLSS runs without its upscaling component?

Alex Tardif, a developer of The Elder Scrolls Online (ESO), has confirmed that DLSS is coming to ESO alongside a new feature called DLAA. DLAA is short for Deep Learning Anti-Aliasing, a feature that uses Nvidia's Deep Learning technology to deliver "fantastic AA quality" on RTX graphics cards.

With DLAA, Nvidia's promising better visuals for games that do not require the performance boosts offered by DLSS. Not every game needs DLSS, but all games could benefit from better anti-aliasing.

Below is what Alex Tardif had to say about DLAA on Twitter. 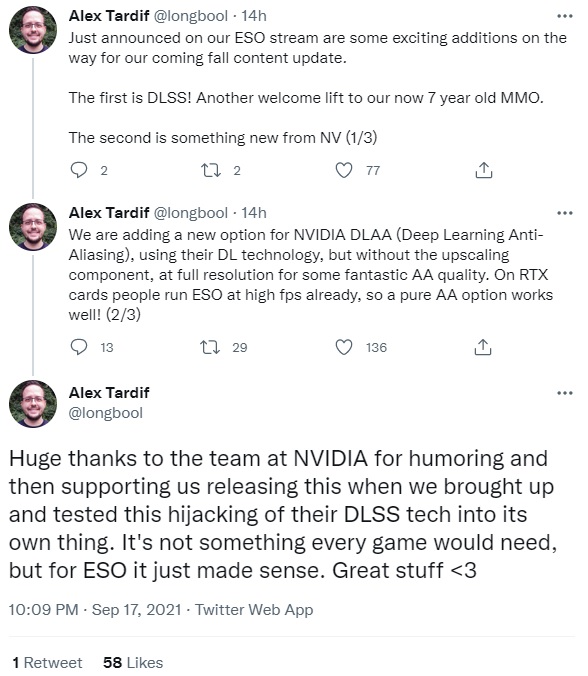 Nvidia's DLAA technology isn't expected to work on non-RTX graphics cards. DLAA is expected to operate like Nvidia's DLSS technology, albeit without DLSS' upsampling component. If DLAA works as intended, it should deliver results that are similar to Super Sampling Anti-Aliasing, which should create sharper, more detailed images that lack any noticeable aliasing, at least at high resolutions.

DLAA is expected to be more taxing than standard TAA technologies, though the quality of DLAA should counter this performance loss. Beyond that, DLAA is designed for games that already run at high framerates, making slightly lower framerates a non-factor for most gamers. DLAA is about quality, not performance.
You can join the discussion on Nvidia's DLAA technology coming to The Elder Scrolls Online on the OC3D Forums.

Dicehunter
You can kind of do a crude form of DLAA in games that have DLSS, Enable DSR in the Nvidia control panel, Use a much higher res ingame and then use DLSS, Probably not as good as this dedicated option but it works nicely.Quote

NeverBackDown
I doubt the performance hit would actually be noticeable if the AI cores are being used. That is unless it cannot keep up with processing at high frame ratesQuote
Reply