GOG is no longer distributing games in both nations

Since Russia's invasion of Ukraine started, Russia's economy has been hit hard by sanctions. Beyond national economic sanctions, many companies are moving their business out of Russia and Belarus, and many sporting bodies are halting Russia's participation in international sport.

CD Projekt, the group behind CD Projekt Red, the developers of Cyberpunk 2077 and The Witcher video game franchises, and GOG, the DRM-free PC games distributer, have halted all game sales within Belarus and the Russian Federation. This change impacts both physical and digital game sales.

CD Projekt Group is a Polish company, and Poland is a neighbour of Ukraine. Poland also neighbours Belarus, the nation that allowed Russia to invade Ukraine though its territory. While Belarus has not invaded Ukraine alongside Russia, it has assisted Russia's invasion in a number of ways. This is why CD Projekt has halted game sales within both nations. Poland has already accepted over 280,000 Ukrainian refugees, a large portion of the one million who have already fled the country. 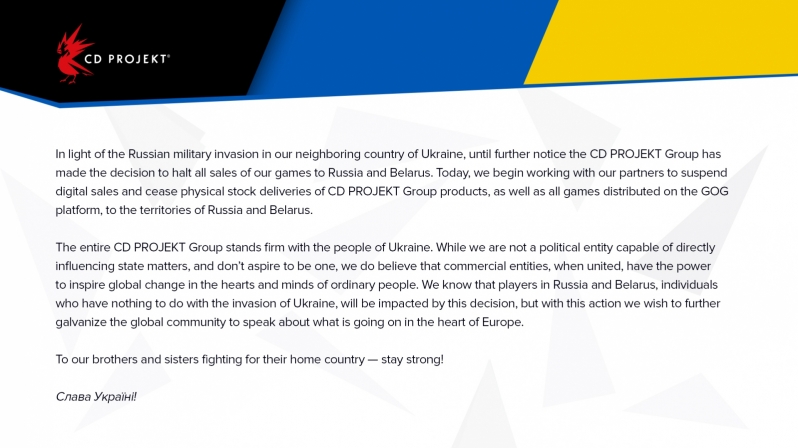 While this action is unlikely to impact Russia's decision to continue its war with Ukraine, CD Projekt Red hopes that its actions will "change the hearts and minds of ordinary people".

CD Projekt has confirmed that they have donated one million PLN to support humanitarian aid efforts. This amount is equivalent to roughly £170,000.

You can join the discussion on CD Projekt's decision to not sell games in Russia or Ukraine on the OC3D Forums. 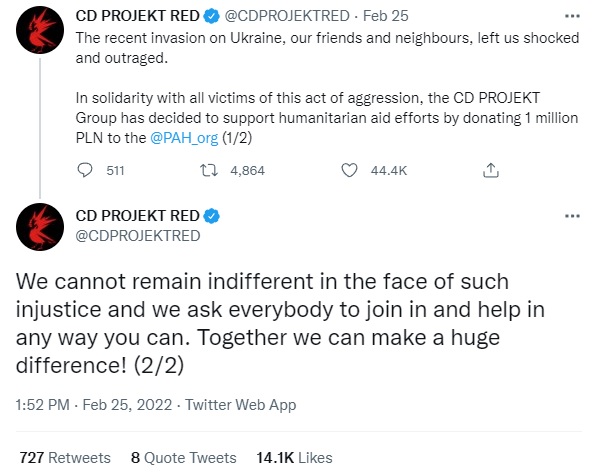 Warchild
You might want to mention Ubisoft has been doing the same and also helping their staff in Ukraine with funding, housing etc.