This DLC explore the Roman Empire's Crisis of the Third Century

A new DLC has been announced for Total War: Rome II, a game that is over four years old. This new DLC moves the series back to its historical Roots, covering a time period that has never been seen before in the series.

This new DLC is called "Divided Empire", covering a historical period call the "Crisis of the Third Century", where the Roman Empire has split into three separate factions and comes perilously close to collapse thanks to internal struggles and barbarian invasions.

This DLC will come with a new Grand-scale campaign map and ten different playable factions across five cultural groups. Each faction will come with their own unique victory conditions in the game's grand campaign map, with period-specific events, tech trees and missions.

One of the game's factions will be classed as "heroic", giving them a more story-driven experience, focusing on the stories of those historical character/leaders. These factions will have certain unit limitations and other unique attributes to create a unique Total War experience. 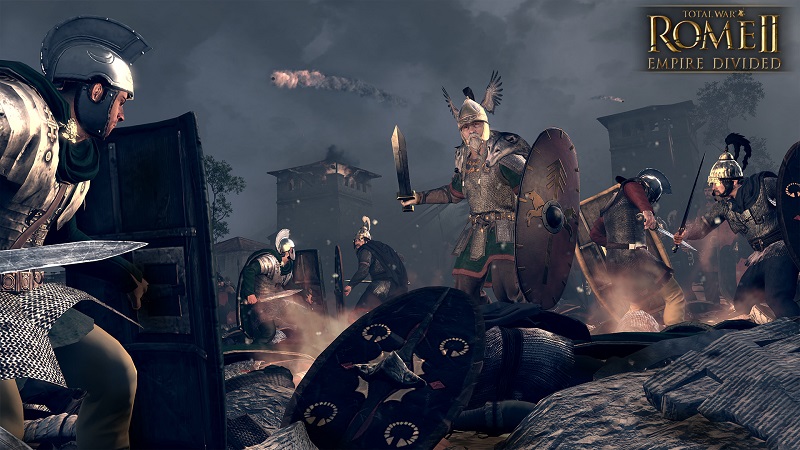 Creative Assembly will also be delivering a free "Power and Politics" update to the base game, overhauling the game's political system to add a variety of new actions, giving a greater meaning to how you deal with other political parties and government types. This update will not apply to Rome II's Caesar in Gaul DLC, as it has its own unique political system.

Empire Divided is set to be released on November 30th, with a price tag of £10.79 (£11.99 without the DLC's pre-order discount). This cheaper price is possible because this DLC is based on Rome II's existing framework.

Total War: Rome II's Power and Politics Update is available now in beta form. The full update will release on November 30th alongside the game's Empire Divided DLC. Those who want to avoid this update entirely will be able to install the game's "patch_17" using Steam's beta functionality.

You can join the discussion on Total War: Rome II's new Empire Divided DLC on the OC3D Forums.

NeverBackDown
As pretty much everyone expected Rome 2 and 3rd Century Crisis. I'm actually pretty excited to find out more about the free update content probably moreso than the dlcQuote

WYP
Quote:
Yeah, but at least it is a good setting. I personally prefer the early-modern era games like Empire and Napoleon, though I still like the others. (Fall of the Samurai is my all-time favourite)

It is nice that some of the content is coming as a free update, though I am still yet to finish my Warhammer II campaigns. Too much Total War!! (not something I ever expected to say)Quote

NeverBackDown
Yeah it's a lot of TW. I have no time for games anymore and all these TW titles coming out is just making a massive backlog of games to get to!

Hope the graphics are improved. I tried playing R2 recently over summer and the graphics did not age that well imoQuote

For example. Those who say that COD's graphics have not improved has either not looked at the new games or have not played World at War or the original COD 4 in a while.Quote

NeverBackDown
Watched some of the stream and YT videos on the FLC update. No graphics as far as I can tell. But they did do small UI changes. Better than nothing I suppose. Diplomacy finally looks like it will actually mean something since it's now going to be tied to politicsQuote
Reply