Day Gone for PC has been listed by Amazon

Is Days Gone getting a PC port?

Days Gone for PC has been listed by Amazon

Update - A Sony representative has stated that "The listings are not accurate. We have made no announcements to bring these games to PC" to IGN.

Days Gone is getting a PC port, at least according to Amazon France, who have listed the game on their online store. This retail listing was first spotted by DSO Gaming and came after several other Sony-related leaks from Amazon France, which included titles such as Horizon: Zero Dawn's now confirmed PC version.

As an Unreal Engine 4 title, there is no reason why Days Gone can't be released on PC. Engine compatibility can be a huge block that stands in the way of a game porting effort, but with Unreal Engine 4, this is not an issue.

Like Horizon: Zero Dawn, a PC release for Days Gone is probable, thanks mostly from the relative ease of which Sony can bring the game to the platform. Guerilla Games' Decima Engine was confirmed to be PC compatible with Death Stranding's PC reveal, and the same hold true with Days Gone and Unreal Engine 4.

The Amazon listing for Days Gone's PC version can be seen below, revealing no release date or pricing for the game. This is similar to past listings leaks from Amazon France.

While Sony has not confirmed that Days Gone is getting a PC port, there is little reason for no PC version of this game to exist, at least from a technical standpoint. Regardless, take this retail listing with a grain of salt until Sony decides to confirm Days Gone's PC version officially. 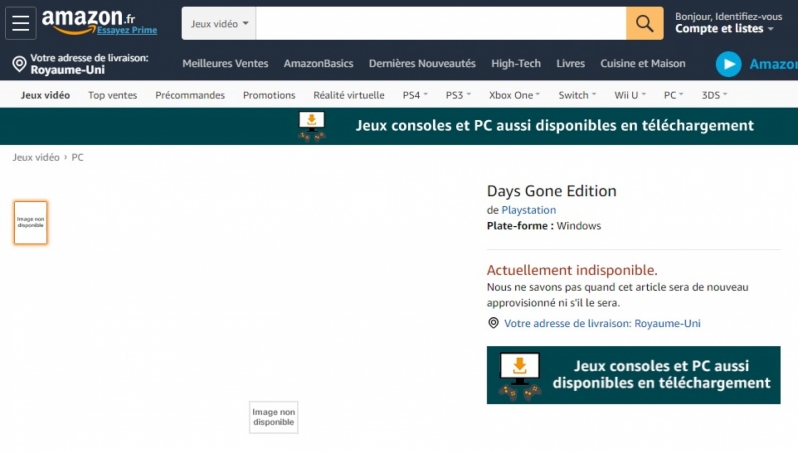 You can join the discussion on Days Gone's PC version appearing on Amazon France on the OC3D Forums.

AlienALX
Not a great game. Made worse by 30 FPS cap.Quote

jcchg
Worst game I have played in years. It still hurts the 30 quid I paid for that.

If God of War and Persona 5 listed PC versions are real, go for those, 100 % worthy.Quote
Reply