Why is XeSS delayed? Did Intel force them to back down?

Dolmen devs back away from XeSS statements days before launch

Without explanation, Dolmen's developers and Koch Media PR have backtracked on statements which implied that their upcoming sci-fi RPG would be launching with support for Intel's XeSS game upscaling technology.

Previously, it was implied that Dolmen would be launching with support for Nvidia's DLSS technology, AMD's FSR 1.0 upscaler, and Intel's XeSS upsampler. Now, it looks like the game will be shipping with out XeSS support. XeSS support was said to land as part of the game's day-1 patch.

As a reminder, here's what Dolmen's developers said regarding XeSS yesterday.

Will XeSS support be available at launch?

I think I can tell you that everything, including the partnership with Intel, will be released in the Day One patch.

Does Dolmen support any other upscaling technologies, such as AMD's FSR and NVIDIA's DLSS?

Yes. The technologies you mentioned are in and will be working with the game.

Okay, that's nice. Are you planning to upgrade AMD FSR to the 2.0 version?

Dolmen will ship with FSR 1.0, but we have the intention to upgrade to 2.0, yes.

If we had to guess about why Dolmen's developers have now backed down from their prior statements, we would guess that the reason behind XeSS' release is Intel. Intel's ARC A-Series desktop graphics cards are launching much later than expected, and even then their first desktop discrete GPUs are said to be launching in China exclusively, at least initially.

Without ARC series GPUs on the market in meaningful quantities, Intel's XeSS technology would not be able to push the company's discrete graphics solutions. Without ARC series GPUs, XeSS would be seen as an alternative to DLSS and FSR that doesn't come from AMD or Nvidia, not as a cutting edge feature from the GPU market's newest contender. Without Intel discrete GPUs on the market, XeSS is a technology that does not benefit Intel. 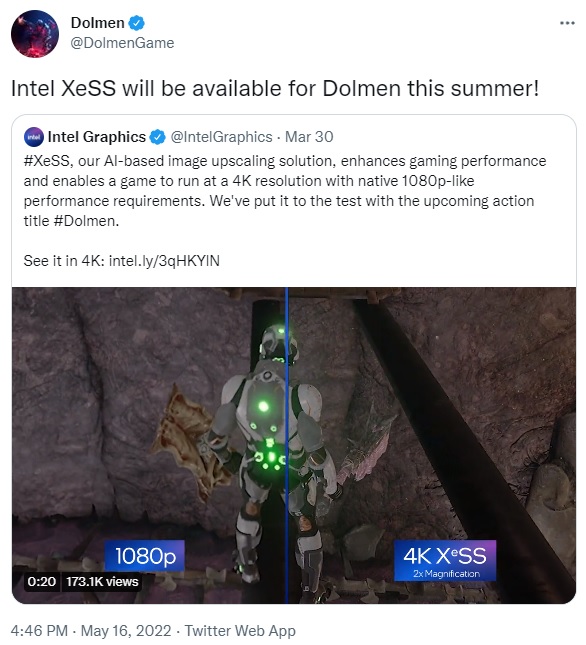 Now, XeSS is coming to Dolmen "this summer". Intel has previously marketed XeSS as a technology that would be launching in "Early Summer", arriving in games like Hitman III, Shadow of the Tomb Raider, Death Stranding, CHORUS, and Grid Legends.

You can join the discussion on Dolmen launching without XeSS support on the OC3D Forums.