DOOM Eternal won't run at 4K 60FPS on Stadia, despite prior promises

At least the Stadia version will support HDR

DOOM Eternal won't run at 4K 60FPS on Stadia, despite prior promises

Bethesda has officially confirmed that DOOM Eternal will not be able to play DOOM Eternal at 4K 60 FPS on Google's Stadia platform, despite prior promises to the contrary.

When Stadia was revealed at GDC 2019, the slide below was shown, which promised that DOOM Eternal would run at "true 4K" at 60FPS on Google's Stadia hardware. Furthermore, the game would support HDR on compatible devices.

Now, we know the truth. DOOM Eternal will run at 1800p, but be up-sampled to 4K. This makes the game a lot less graphically impressive than what was first promised, but it makes sense given the strength of Google's Stadia hardware.

DOOM Eternal's promised resolution and framerate is yet another promise that Stadia hasn't been able to live up to. This makes the Stadia version of DOOM Eternal roughly equivalent to the game's Xbox One X version, despite Google's claims that Stadia is a stronger platform. 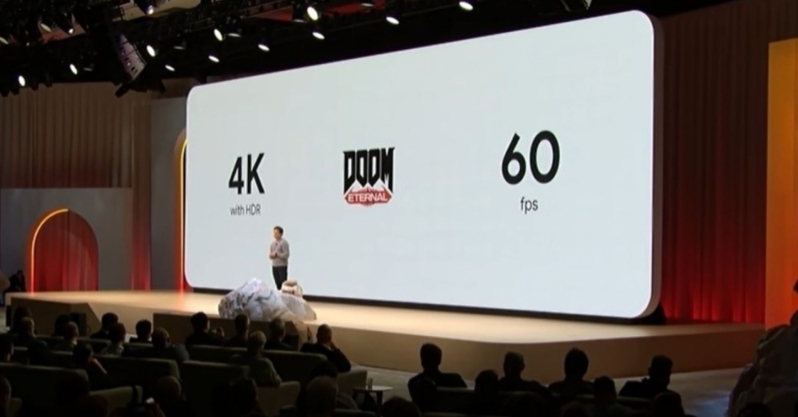 At this time, it is unknown why this promise isn't being kept. Maybe Stadia isn't as powerful as expected, maybe Bethesda and id Software decided to push DOOM Eternal's graphics in another direction, or perhaps DOOM Eternal's Stadia version isn't as well optimised as other platforms.

While 1800p is fairly close to 4K, it isn't the native presentation that was promised on Stadia. In time, Google will have the option to strengthen its Stadia platform with stronger PC hardware, but for now, Stadia is a disappointment.

You can join the discussion on DOOM Eternal failing to meets Google's promised Stadia performance targets on the OC3D Forums.