Techland has just released Dying Light 2's Community Patch 1, which makes changes to their game based on fan feedback and recent technological innovations.

Fans of Dying Light 2's original "Gritty" colour grading from the game's earliest trailers and gameplay now have a "Gritty" option to enable in-game. Gamers have also been given the option to disable chromatic aberration if they do not like this effect.

Gameplay-wise, Techland has worked to increase the density of zombies "Biters" in the city, make them more aggressive at night, and increase the number of special infected encounters that occur at night. These changes make night-time more dangerous, which makes sense given the game's plot and lore. 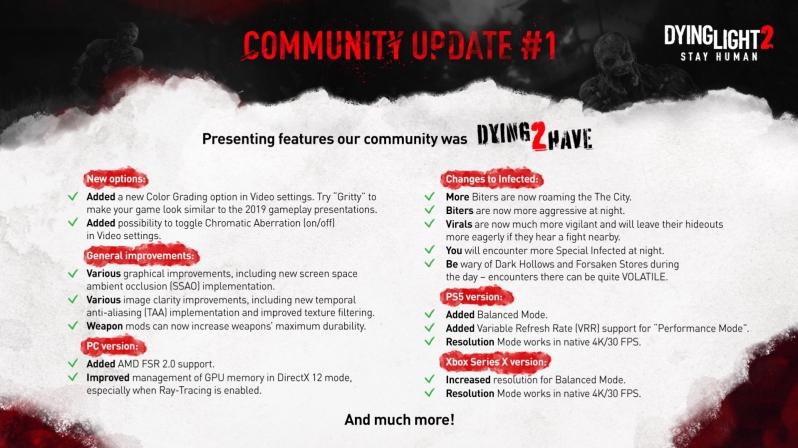 On consoles, several hardware-specific changes have been added to Dying Light 2, including a higher resolution balanced mode for Xbox Series X, Variable Refresh Rate mode for the game's PlayStation 5 version in performance mode, and a new 4K 30 FPS Resolution Mode for both PlayStation 5 and Xbox Series X.

On all current-generation platforms, Dying Night 2 should now feature improved visuals thanks to clearer TAA and improved texture filtering.

You can join the discussion on Dying Light 2's community patch 1 on the OC3D Forums.