Elon Musk appears to be reconsidering his plans for Twitter

Elon Musk has claimed that he has placed his $44 billion acquisition of Twitter "temporarily on hold" as he is seeking details that support Twitter's calculation that fake/spam accounts represent less than 5% of their users.

Musk posted his remarks on Twitter citing information that was publicised by reuters. Now, Musk seeks information about Twitter's calculations, as they appear to have an impact on his plans for the platform.

If Musk's deal to buy Twitter closes, Twitter will become a privately owned company under him. This change will give Musk the power to do what he wants with the platform, allowing him to attempt to unlocked the company's "tremendous potential". Part of his plans for Twitter is to crackdown on bots and spammers, citing it as a key goal for the platform under his ownership.

Following Musk's announcement on Friday morning, Twitter's share price dell by 19% in pre-market trading. It is likely that the stock will rally if/when Musk confirms that his deal is no longer "on hold". 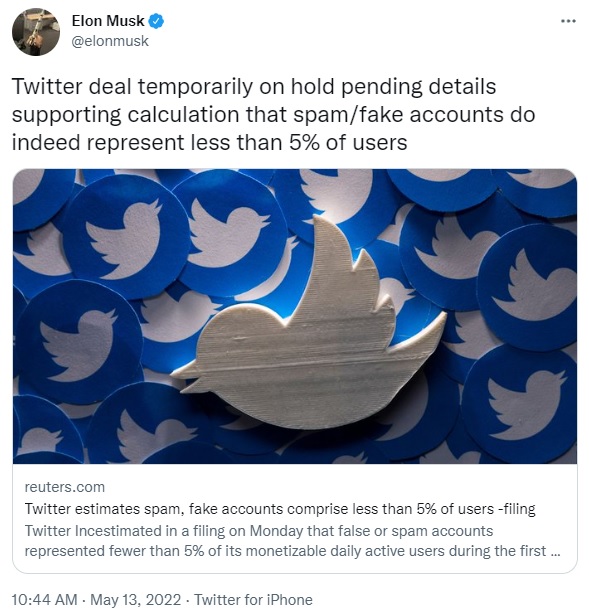 In a recent Tweet, Musk stated that he wanted to make Twitter better by enhancing the site with new features, relaxing the sites content restrictions, and by taking measures to eradicate spam on the platform. Musk wants Twitter to be a "digital town square" for free speech, and hopes to increase trust in the platform by making its algorithms open source. He also recently confirmed that he planned to reinstate the account of former US President Donald Trump.

You can join the discussion on Musk putting his Twitter deal "on hold" on the OC3D Forums.

dazbobaby
Is he having second thoughts or having trouble raising the funds, or both?Quote

Dawelio
Apparently he’s being investigated for not properly disclosing some thing last winter, which were in the billions as well…Quote

NeverBackDown
Quote:
Doesn't change anything. The deal was agreed upon at a set price. If the stock dropped 80% he'd still pay what was agreed uponQuote
Reply