EVGA has launched what is perhaps the most unexpected product of CES 2019, extending their range of gaming products with an audio card called the EVGA Nu Audio.

Now for those wondering "what business does EVGA have making audio cards?", the company have created this product with Audio Note, a UK based company that has over 30 years in the field. Though their partnership with EVGA Audio Note has assembled an assortment of "audiophile-grade digital and analog components" to carefully craft the NU Audio, including several components that are exclusive to the company.

EVGA plans to release their new NU Audio soundcard on January 16th, 2019, hoping to deliver  "True Audio", "Lifelike Gaming" and "Studio and Audiophile Grade" quality. Fans of RGB illumination will also be glad to hear that EVGA are including RGB lighting, with the card supporting reactive lighting the changed with audio, select one of 10 colour options or turn off the lights for a stealthier look.

Output-wise, the EVGA NU Audio offers line out, line in, mic in, S/PDIF Out and headphone connections, with EVGA supplying NU Audio Software which will enable users of the audio card to customise the card's output to their liking, creating custom EQ profiles while also offering control options for the card's reactive RGB lighting.

At this time EVGA has not revealed the final pricing of the component. 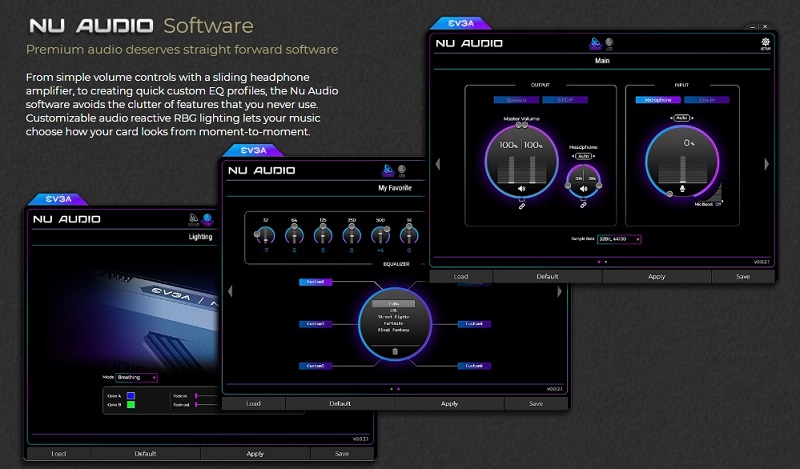 You can join the discussion on EVGA's NU-Audio Audiophile-grade Soundcard on the OC3D Forums.

NeverBackDown
More software to be installed and more interfaces. It's getting pretty annoying now with every new thing requiring it's own GUI. I'd rather just stick with an external dac/amp and install a driver then never look at it againQuote

Darkdayzzz
Quote:
I think this product fits a VERY niche crowd.... I mean its like you said: I myself use my soundbar and sub setup for audio and it plays wonderfully on the audio that is on my MSI board.

I wouldn't fiddle with the software of this addon card very often if ever and even if I did I don't think this would sound any better then my current method of letting the onboard audio chip on the mobo work.

This just seems like an idea that could work just have to go back 10 years or more in time .__.Quote

AlienALX
Audio Note. My mind went blank for a moment, then I remembered who they are. They designed the valve amps the company I used to work for produced (Rogers UK, suppliers to the BBC).

EVGA haven't messed around with who they hired, this won't be cheap. At all.


Quote:
TBH the whole "head fi" movement has lost a lot of ground and companies are no longer smashing out amp after amp. I think every one got what they wanted, and are more than happy to stick with it.

I still run "off board" sound cards which is just my personal preference. You can't OPAMP swap a onboard.

I also like the different sound signatures the cards I run have. For example the detail of the SB Titanium HD is very bright, which seems to marry very well with Grado headphones. Asus are more deep and grumbly, so match better with the heavier bass driven cans I have.

You're right though, it is very niche. I just worry that EVGA have gone so overboard with who they hired and had design it that for most (pardon the pun) it would just fall on deaf ears. Only the most astute of Audiophiles would even know who Audio Note were. And then nearly all of them would be British.Quote

Static
The specs are pretty impressive I just wish there was an external version.

AlienALX
Yup. I can afford it and would give it a go if I had not vertically mounted my GPU. Kinda leaves me with no choice. Probably for the best really.Quote
Reply