Fortnite is leaving its competitors in the dust

According to data from Matchmade, Fortnite has officially overtaken Minecraft as YouTube's most viewed game, leaving its nearest competitors like PUBG in the dust, both in terms of viewership and upload frequency.

This success can be attributed to several factors, from the game's existence on every major platform from PC to consoles and even mobile and the free to play status of the game's Battle Royale mode. This accessibility makes Fortnite the game a lot easier to pick up than PUBG,  which is purchasable for around $30 on PC and Xbox One, making the game a lot more attractive too prospective players, especially younger gamers without any expendable income.

YouTube's Ryan Wyatt has stated that Fortnite now holds the "record for the most videos related to a video game uploaded in a single month EVER." The quantity of Fortnite videos is a huge factor for the game's success on YouTube, giving users a seemingly endless supply of online personalities to watch playing the game, either for gameplay tips or entertainment value. 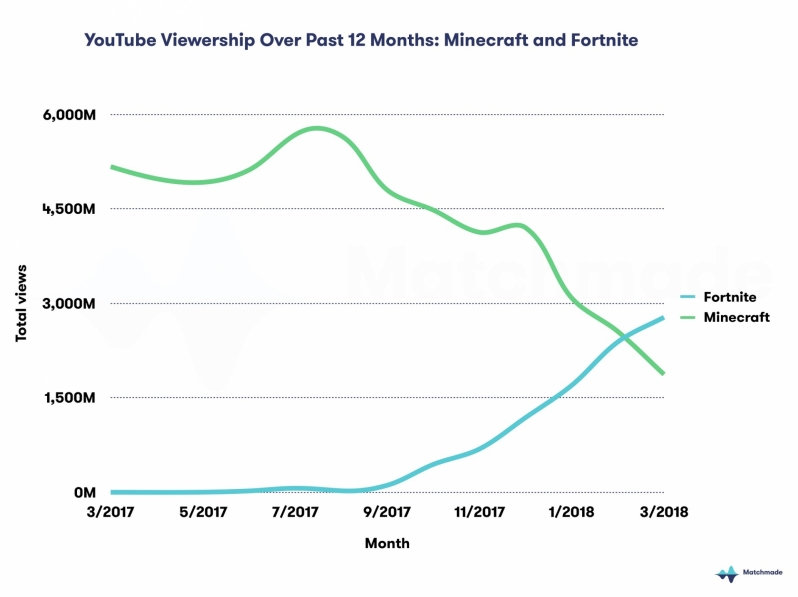 While Fortnite has surpassed Minecraft's current viewership, the game has a long way to go before it can reach the game's peak view counts. In recent months, the viewer counts for Clash Royale and Minecraft have been declining, with PUBG's viewer base remaining somewhat steady. It may not be long before the hype surrounding Fortnite will make it the world's most popular game, if it isn't already.

You can join the discussion on Fortnite becoming YouTube's most popular game on the OC3D Forums.
«Prev 1 Next»

Dawelio
Heard from Linus that they have surpassed PUBG as well?...Quote

MacLeod
My kid got me to download and play this with him...its infuriating!!! You drop in, grab a gun or two and BAM you're dead... One shot usually kills you. Or worse, you spend several minutes hunting for guns and potions and finally have a good stash and then BAM you're dead, one shot.

I rage quit after about 20 minutes. Guess you have to buy a bunch of stuff to keep from dying so easily.Quote

Dawelio
Quote:
Sounds like you had a good game then

MacLeod
Quote:
Haha, no, each game only lasted a minute or two. I kept trying because my kid loves the game but man I had to quit cause I was about to have a stroke lolQuote

Dawelio
Quote:
Yeah, it totally sounds like you had a good game dude