Forza Horizon 5 has just recieved a major update, adding support for new vehicles, customisation options, a new test track, and extended ray tracing options on PC. Additionally, both DLSS 2.4 and FSR 2.2 have been added to the PC version of Forza Horizon 5 on PC.

Following the positive reception of Forza Horizon 5's TAA support, Playground Games has added support for temporal upscaling to their game. DLSS (and DLAA) will be available for owners of Nvidia's RTX graphics hardware, and AMD's FSR 2.2 technology will be available for owners of graphics cards from AMD, Nvidia, and Intel. Playground Games has confirmed that DLSS 3 support is not currently planned. 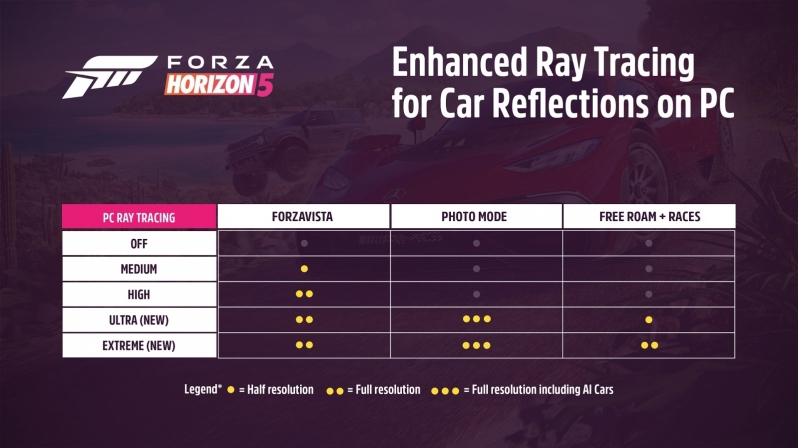 Previously, ray tracing was a feature that was exclusive to Forza Horizon 5's Forzavista mode. Soon, ray tracing will be available during gameplay to PC gamers with strong enough hardware.

You can join the discussion on Forza Horizon 5's latest patch on the OC3D Forums. Full patch notes for the update are below.

looz
Was hyped about DLSS, but crashing to desktop every 30min with it enabled made me less hype about it.

Warchild
Did this need DLSS? I thought it was so well optimised almost any mainstream pc that isnt high end could run almost max graphics and get outstanding FPS.

Or am I getting that wrong?Quote

AngryGoldfish
Quote:
I think Nvidia are trying to make DLSS the industry standard that is in everything, even when it's not needed. Imagine the lead Nvidia would have over AMD if DLSS was literally in every game. It wouldn't matter whether it was needed or not as Nvidia would lead the charge by 20-30%.Quote

meuvoy
Quote:
Still, if you're on a 2060 for example I guess you would want to use it to get high FPS while maintaining high graphics settings, if nothing else, this at least enables 4k gameplay for those users.

Also, they did add in raytracing, so even if you're on a 3070 you'll probably want DLSS if you'd like to enable RT at 4k.Quote

looz
Quote:
I have to play at quite modest settings to ensure minimums stay above 120fps even with my hardware: https://i.imgur.com/hsYTEKP.png