Is your PC ready for God of War?

God of War is coming to PC on January 14th, arriving via Steam and the Epic Games Store. With enhanced visuals and new features like DLSS, FSR and Nvidia Reflex, the PC version of God of War will be the game's definitive edition, offering PC gamers features that even PS5 users lack.

One of the key feature of God of War's PC version is that the game will feature an uncapped framerate, allowing PC gamers to play God of War at framerates above 60 FPS. This will allow PC gamers to experience God of War with smoother animations and lower latency controls than the game's console versions. Additionally, with Nvidia Reflex, PC gamers can cut latency even further to make God of War more responsive than ever.

Today, Sony has also revealed God of War's PC system requirements, which we have detailed below. But first, here is God of War's PC features trailer, which details many of the game's PC-only enhancements.

God of War's PC version has multiple graphical presets, with "Original", matching the graphical settings of the game's PS4 version. Above this, PC gamers have a high and ultra preset to utilise, giving PC gamers higher fidelity visuals than PS4 players. Alongside higher resolution and higher framerate support, this should give PC gamers a better experience than the game's original console players.

Sony has confirmed that God of War's PC version will support their DualShock 4 and DualSense wireless controllers and other PC gamepads. Mouse and keyboard controls will also be an option for those who dislike gamepads.

Below are God of War's official PC system requirements. 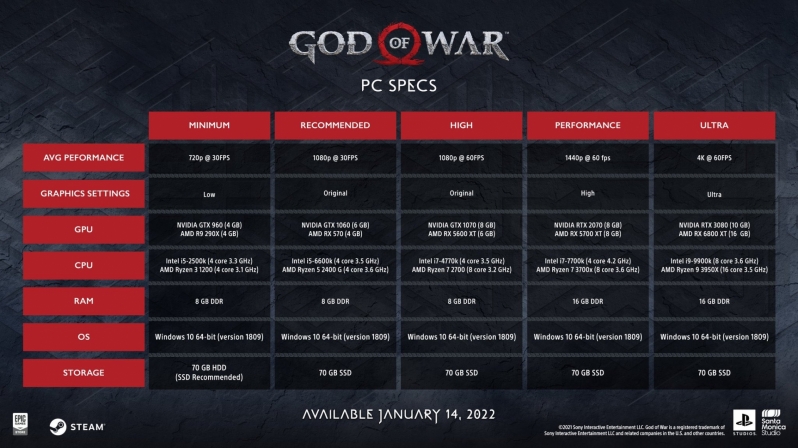 You can join the discussion on God of War's PC system requirements on the OC3D Forums.

Dicehunter
I'm curious if at a later date features like RT Reflections or RTAO could be added in, Would really add to the atmosphere.Quote
Reply