This driver contains a large number of fixes

Marvel's Guardians of the Galaxy has received patch 2982110 on PC, bringing many bug fixes and improvements to the game alongside new performance optimisations for both CPUs and GPUs.

Before we start discussing the patch in more detail, we will note that Eidos Montreal recommends that PC gamers install their GPU's latest drivers before playing Marvel's Guardians of the Galaxy, except for Nvidia GTX 900 series users. PC gamers using GTX 900 series GPUs should stick to Nvidia's 471.11 drivers, as newer drivers presumably feature bugs that may impact Guardians of the Galaxy's playability.

Fixes within this patch include achievement unlock fix for the game's "This is what we do" achievement for PC gamers on the Epic Games Store, a fix for incorrect languages appearing in menus, fixes for various crashes, and improvements to the stability of Guardians of the Galaxy's ray tracing implementation. 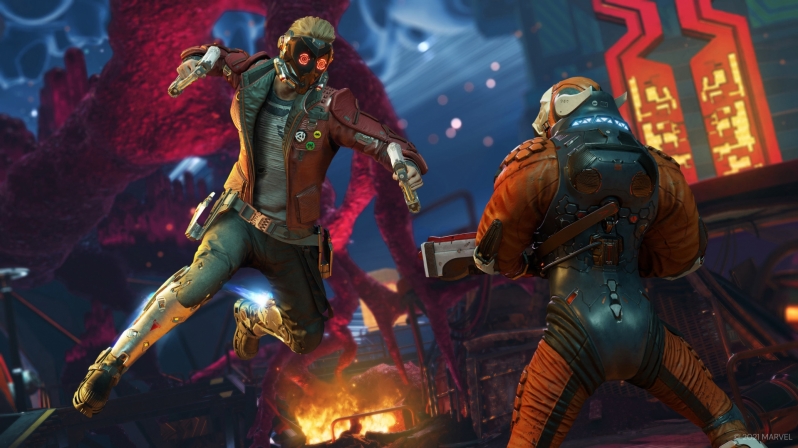 With the latest Guardians of the galaxy patch containing ray tracing support for the game's Xbox Series X and PlayStation 5 versions, it makes sense that this patch's PC counterpart includes new optimisations for the PC version's ray tracing options. With this in mind, it also makes sense that these new patches contain GPU optimisations that are most impactful for players running Guardians of the Galaxy at high resolutions.

Patch notes for Guardians of the Galaxy's 2982110 patch are available below.

You can join the discussion on Guardians of the Galaxy's latest PC patch on the OC3D Forums.

- General stability improvements
- Multiple improvements to stability with Ray Tracing enabled
- Fix for refresh frequency issue with exclusive Fullscreen
- Fix for a few rare crashes during combat
- Fix for a rare visor crash
- Fix for a rare crash when using Drax's wrecking ball ability
- Fix for a rare crash during dog fight
- Fix for Epic Games Store - "This is what we do" achievement unlock
- Fix for Epic Games Store - save game issue with wide character user names
- Fix for an issue where the Compendium entry “Gasher and Gnasher” might not unlock.
- Added a failsafe to ensure that the “Fully Loaded” achievement could be unlocked
- Fix for players who may become locked out of the Guardians menu after the first ability point tutorial
- Fix for Español (España) language appearing as English
- Fix for Arabic description text in launcher
- Fix for icon flicker, invalid icon and scale issues
- Fix for instances where the poison gas could not be frozen again after a reload.
- Improvements made to transition in and out of Workbenches in order to address some instances of Rocket refusing to use the Workbench.
- Fix for a rare issue where Star-Lord may be caught in a state of falling out of world in Chapter 1, after falling on the Milano
- Fix to allow the Crane puzzle of Chapter 7 to be completely reset when reloading checkpoint, so that users may be allowed to retry in rare instances where they become blocked
- Fix to allow users to win the chase sequence in Chapter 9 more easily
- Fix for a funnel in Chapter 10 which made access to an outfit difficult of access
- Fix for one instance where Groot may be unable to create a Groot lift leading to a side path in Chapter 10
- Fix for rare instances where a Drax throw object needed to progress may not appear during Chapter 13
- Save Rollback: A hidden Save Rollback feature was added to allow users who have encountered blocking issues to rollback to the start of the chapter of their choice. Please see this thread for more details.
- Updated wording for privacy statement

Other fixes and changes

- Fix for ray trace material for Star-Lord's helmet and addition of missing materials
- Fix for raytraced transparent reflection description in launcher
- Fix for flight mouse control turn during afterburner boost or dodge maneuvers
- Fix for Compendium scroll bar
- Fix some cases where Xbox controller prompt was wrong
- Fix for Microsoft Elite II with wireless dongle identification
- Fix for mouse sensitivity control
- Fix for widescreen issue with dogfight HUD layout
- Fix for grass rendering
- Fix for foliage popping
- Fix for AMD Fidelity CAS sharpening, which is now enabled in Photo Mode
- Fix for instances where Star-Lord’s eyes might glow red with ray tracing enabled.
- Fix for an issue where the Rocket Bet scoreboard may still appear on screen after the bet is over.
- Radio communications can now be heard through the controller.
- Fix for the Rocket line that was being played through Groot’s voice.
- Fix for save icon occasionally sticking on screen.
- Fixes for rare instances where Guardians may disappear in combat.
- Fix for a funnel where Star-Lord may occasionally become stuck when running at higher FPS.
- General improvements to objective markers.
- Additional improvements to world boundaries.
- Addition of -NoLauncher command line option to suppress launcher
- CPU performance optimizations for RT
- GPU performance optimizations, particularly at higher resolutions