Lance McDonald, the PlayStation hacker behind Bloodborne's popular 60 FPS mod/patch, has showcased a new PlayStation 5 exploit that has allowed him to install software on his console.

Using a newly discovered PlayStation 5 exploit, Lance managed to install a PlayStation 4 PKG file of Konami's infamous PT demo, a demo that is no longer available to download. On Twitter, McDonald proved that the PlayStation 5 jailbreak was a success, though at this time it is unknown how this hack will impact Sony long term.

Currently, the PlayStation 5's jailbreak appears to only offer exploiters limited access to the console, only working on version 4.03 and earlier versions of Sony's PlayStation firmware. The exploit only appears to work around 30% of the time, and currently only appears to offer read/write access to the console. Right now, this exploit does not allow PS5 users to execute code on their systems, though it is possible that hackers will find ways to further exploit Sony's consoles.

Right now, Jailbroken PlayStation 5 consoles cannot be used to pirate games or do any other illicit activity. We do not recommend that PlayStation 5 users try to jailbreak their own systems, as the advantages of doing so are currently non-existent and Sony may be able to ban your PlayStation from the PlayStation Network if you jailbreak your system. 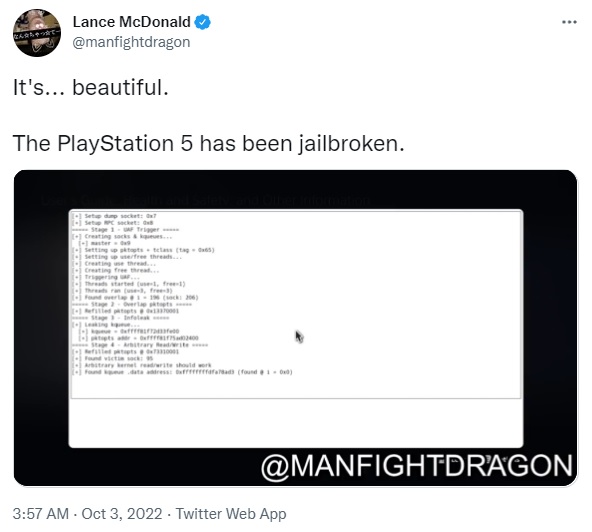 Sony will likely be doing what they can to harden their future PlayStation 5 firmware revisions against today's exploits, though it is possible that Sony's PlayStation 5 could be hack in a way that is unpatchable.

You can join the discussion on hackers jailbreaking Sony's PlayStation 5 console on the OC3D Forums.

Anon
You can just flash it with older firmware can't you?Quote

NeverBackDown
They pretty much force you to update so this isn't overly a big deal for most people... CurrentlyQuote
Reply