Every DirectX 12 game should do this!

If there is one complaint that I often see regarding DirectX 12 titles, it's that frame rate stutters are common in many games. Frame rate stutters can ruin the fluidity of many games, taking players out of the action by making gameplay feel jittery and non-continuous.

Hellblade: Senua's Sacrifice's next-generation PC update launched last month, adding ray tracing and other visual enhancements to the game. This update moved Hellblade to DirectX 12 on PC. For many players, this resulted in added stuttering and the introduction of new bugs. Thankfully, the latest patch for the game addresses these issues, including the game's stuttering on many systems.

If you play a lot of PC games, you will have seen this. You will start a game, and the game will then spend some time pre-compiling shaders. This is often done the first time you play a game, after major game patches, and whenever you change your PC's hardware.

This shader pre-generation allows developers to optimise their game's shaders for your system and prevents stalls/stutters that may come with runtime shader compilation. Essentially, if developers do these shader compilations before you play the game, it will help the game avoid stuttering and similar issues later.

Hellblade's newest patch offers users a "Fix for stuttering" that is achieved "by pregenerating a package of shaders for both RT On and Off presets." 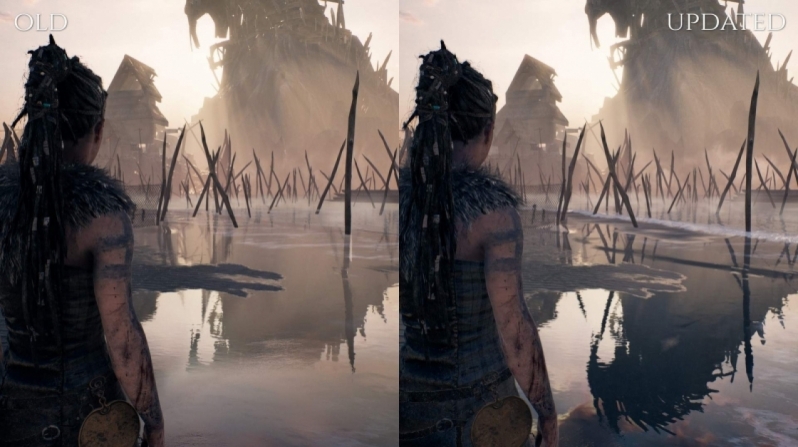 Other fixes that are included with Hellblade's latest PC patch are fixes for ultra-wide monitors, a fix for incorrect audio levels on some systems, and other minor fixes. The patch's full release notes are below.

Following our recent update bringing visual enhancements and accessibility improvements to Hellblade: Senua’s Sacrifice, we have released a patch addressing some of the minor issues some users were encountering. These include:

- Fix for ultra-wide screen support
- Fix for audio levels not being applied properly after the update in certain cases
- Fix for sliders not working when dragged along
- Fix for RT shadows switching when looking through a portal on Valravn's map
- Fix for stuttering some people experience with DX12, done by pregenerating a package of shaders for both RT On and Off presets.

You can join the discussion on Hellblade's latest PC patch adding a vital DirectX 12 optimisation on the OC3D Forums.