Are you ready for next week's beta?

Battlefield 2042's Open Beta starts next week, arriving early to Early Access players on October 6th and everyone else on October 8th. The beta will end on October 9th, with pre-loads starting on October 5th for all gamers.

The beta will be available to gamers on PlayStation 4/5, Xbox One/SeriesX/S, and PC. Early access will be open to those who pre-order the game and to EA Play subscribers. The beta will include two modes, Conquest and Orbital, with four available specialists. PC and current-generation console users will have access to 128-player multiplayer.

On PC, Battlefield 2042's open beta has system requirements that are higher than its predecessors. Battlefield 2042 will require a Ryzen 5 3600 or an Intel i5 6600K to run on the CPU side. GPU wise, a graphics card with a minimum of 4GB of VRAM is required, such as a Radeon RX 560 or and Nvidia GTX 1050 Ti. DirectX 12 support is also a must for Battlefield 2042, suggesting that the game will not feature a DirectX 11 mode on PC.

Battlefield 2042's recommended system requirements have received a larger boost, increasing the game's recommended AMD processor from a Ryzen 3 1300X to a Ryzen 5 2700X. As mentioned before, SSD storage is also recommended.

You can join the discussion on Battlefield 2042's Open Beta on the OC3D Forums. 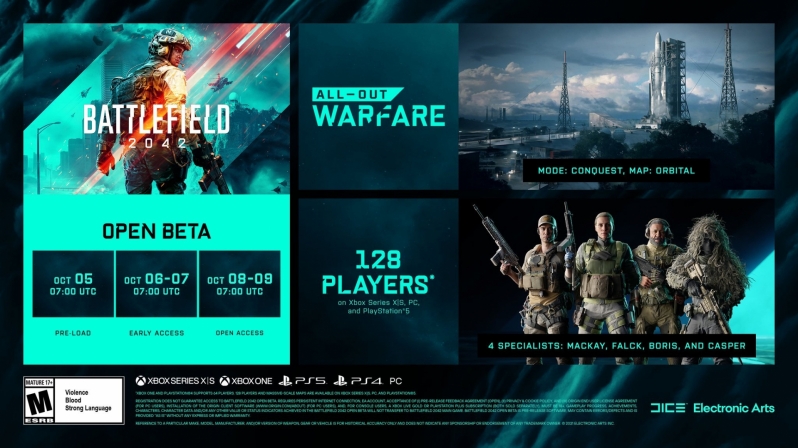 KingNosser
GMG just give me the key already

I think i'll be fine most likely play similar to BFV just with more effects going on is my feeling.Quote

dazbobaby
I haven't touched a BF game on the PC since 2142, and this being sort of a prequel is seriously tempting me. That and the fact I'm still waiting for a next-gen console.Quote
Reply