What happens when you pair together eight PCIe 4.0 NVMe SSDs? What if you take things further and place 16 PCIe 4.0 M.2 NVMe SSDs into a RAID configuration? HighPoint has answers for these questions, being the first company to create a PCIe Gen 4 x16 SSD RAID controllers that support up to eight NVMe SSDs each.

With support for up to eight M.2 SSDs, HighPoint's SSD7540 SSD controller can easily saturate the product's PCIe Gen 4 x16 interface. Four PCIe 4.0 x4 M.2 cards can already do that (4x 4 is 16 after all), making thie SSD7540 controller card's additional M.2 slots useful for maximising storage capacity or for optimising a RAID configuration for sequential performance or random I/O.

No matter what way you look at it, HighPoint's 8-drive M.2 RAID controller is an overkill product. Just look at the performance levels that this controller can offer in the performance demo below. Samsung's 980 Pro SSD is already plenty fast, but when you bring together eight or sixteen drives, madness ensues.

Below is HighPoint's Press Release for their new SSD7540 SSD controller.

HighPoint M.2 HPC Series RAID Controllers establish a new benchmark for NVMe performance: up to 55,000 MB/s for a single RAID array. HighPoint manufactures the industry's most comprehensive selection of M.2, U.2 and U.3 NVMe RAID controllers. The 8-Port SSD7540 and SSD7140A represent the best M.2 solutions available in today's marketplace. HighPoint 8-Port High-Port-Count (HPC) M.2 controllers deliver unbeatable performance and storage capacity in a compact PCIe device that can be easily integrated into any industry standard computing platform. Our SSD7540 PCIe Gen4 x16 controller can support up to 64 TB of storage at speeds up to 28,000 MB/s. Dual-Card Cross-Sync configurations can double performance and capacity thresholds - up to 120+TB at an astonishing 55,000 MB/s.

HighPoint's unique performance-focused NVMe architecture utilizes intelligent switch technology to allocate up to x4 lanes of bandwidth to each NVMe device port. This enables our 8-port controllers to fully saturate x16 lanes of host bandwidth using as little as four NVMe SSDs. However, additional SSDs can be added to maximize storage capacity, or fine tune the configuration for a specific application by optimizing a RAID array for sequential or random I/O.

SSD7500 and SSD7000 Series 8-Port M.2 NVMe RAID controllers employ HighPoint's advanced NVMe RAID engine, which is capable of supporting one or more RAID 0, 1, or 10 arrays, JBOD (span) configurations, or individual SSDs. A RAID 0 array will maximize performance and storage capacity. RAID 1 "mirroring" adds a layer of data security - anything written to the target SSD is automatically duplicated to a second hidden SSD, which will immediately take control should the target fail or fall offline. RAID 10 is unique to HighPoint NVMe solutions, and blends performance with security. A RAID 10 array is comprised of two mirrored pairs striped together - it delivers performance on par with RAID 0, yet allows one member of each RAID pair to fail without the risk of data loss. 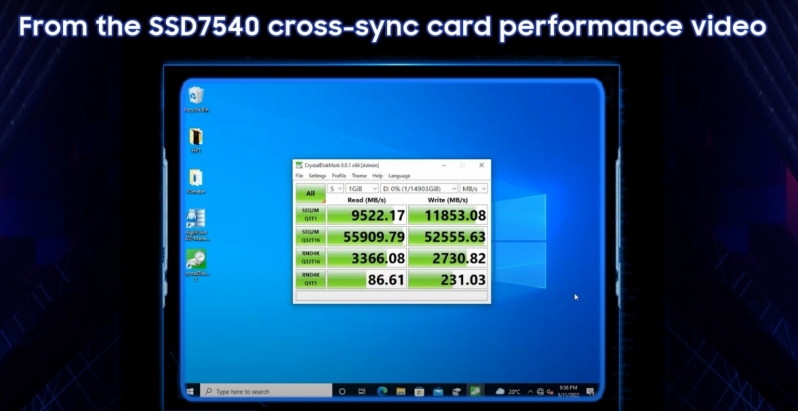 M.2 controllers directly host the NVMe media - this makes for a much more compact and streamlined solution, as the host system does not need to provide internal drive bays or accommodate additional cabling accessories. At 11.22" in length, HighPoint 8-port M.2 RAID controllers are single-width and conform to full-length, full-height, specifications. As such, they can be easily installed into most desktop chassis and 2U+ rackmount servers.

The SSD7140A PCIe 3.0 x16 controller can support up to 64 TB at speeds up to 14,000 MB/s, and is the industry's fastest single-card PCIe Gen3 RAID solution. The SSD7540 PCIe Gen4 x16 RAID controller can support the same level of storage capacity but can double the performance envelope to 28,000 MB/s. If you need maximum performance, you need a Gen4- based solution. Gen4 controllers double the performance potential of Gen3 models. Gen4 SSDs are becoming the M.2 media of choice as they are readily available, affordable, and fully backwards compatible with Gen3 solutions. Recent refinements in caching technology enables Gen4 M.2 solutions to deliver a level of performance that was simply inconceivable just a few years ago.

HighPoint's revolutionary Gen4 NVMe RAID technology takes this a step further, and has established a new performance benchmark. For the first time ever, a single NVMe RAID array has broken the 48,000 MB/s barrier. Cross-Synced SSD7540 controllers can now deliver a mind blowing 55,000MB/s of transfer performance - nearly 4x what is possible with a Gen3 solution.

The SSD7540 and SSD7140A are now available direct from HighPoint, and our Certified North American Retail and Distribution partners.

You can join the discussion on HighPoint's PCIe 4.0 M.2 NVMe SSD controllers on the OC3D Forums.

NeverBackDown
But can it run crysis?!

On a serious note that's so overkill I don't think I'd need that for the next 15 years!Quote
Reply