CD Projekt Red has just released Hotfix 1.22 for Cyberpunk 2077, releasing the update on PC, consoles and Stadia. This update focuses on addressing quest/Open World bugs and adding new performance optimisations to the game.

Update 1.22 also promised improved GPU performance by improving the game's cloth skinning and rendering. On top of this, a bug has been addressed that prevents many instances of "clipping" on NPC clothing.

Xbox One users should see the largest improvement with patch 1.22, as it delivers new platform-specific GPU and ESRAM performance improvements. Memory management on PlayStation 5 is also said to be improved.

Full patch notes for Hotfix 1.22 are available at the bottom of this article. 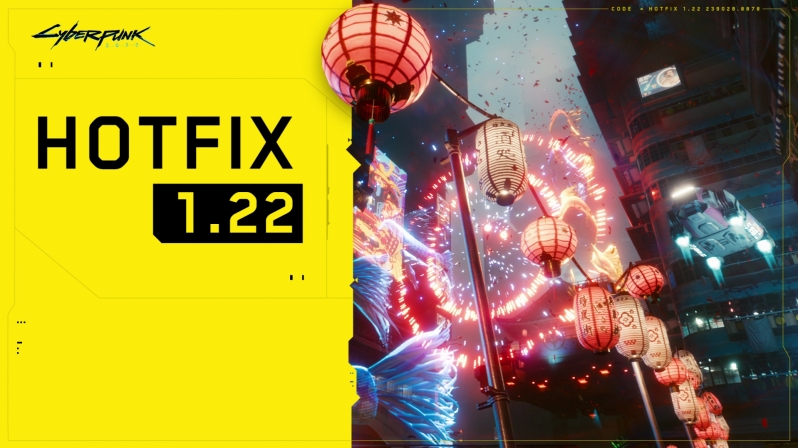 You can join the discussion on Cyberpunk 2077's Hotfix 1.22 patch on the OC3D Forums.

- This update addresses the most frequently reported issues since the last patch and introduces further improvements to stability and performance of the game. Here is the list of changes:

- The Metro: Memorial Park dataterm should now properly count towards the Frequent Flyer achievement.
- Fixed glitches in Johnny's appearance occurring after buying the Nomad car from Lana.
- Fixed an issue in Gig: Until Death Do Us Part where it was not possible to use the elevator.
- Fixed an issue in Epistrophy where the player could get trapped in the garage if they didn't follow the drone and ran into the control room instead.
- Added a retrofix for the issue we fixed in 1.21, where Takemura could get stuck in Japantown Docks in Down on the Street - for players who already experienced it before update 1.21 and continued playing until 1.22, Takemura will now teleport to Wakako's parlor.
- Fixed an issue preventing the player from opening the phone in the apartment at the beginning of New Dawn Fades.
- Fixed an issue where the player could become unable to use weapons and consumables after interacting with a maintenance panel in Riders on the Storm.

- Fixed an issue where subtitles were not properly aligned in the Arabic language version.

- Various memory management improvements (reducing the number of crashes), and other optimizations.
- Improved GPU performance of skinning and cloth rendering.

Gothmoth
to be honest i have not notice any perfomance increase.Quote
Reply