As of right now, Humble's "Stand with Ukraine" bundle is the beast deal in PC gaming, offering PC gamers access to a huge number of games for £30.52. Even better, all of the money raised by the bundle goes to charity, supporting  Razom for Ukraine, the International Rescue Committee (IRC), the International Medical Corps, and Direct Relief.

As of today, the Humble Stand with Ukraine Bundle has already raised over 10 million pounds, a staggering amount of money that will make a difference to the people it will support. The bundle will be available until March 25th at 6 PM GMT, after which the bundle will no longer be available to purchase.

Below is a few content highlights from the Humbler Stand with Ukraine bundle. You can purchase the full bundle here. 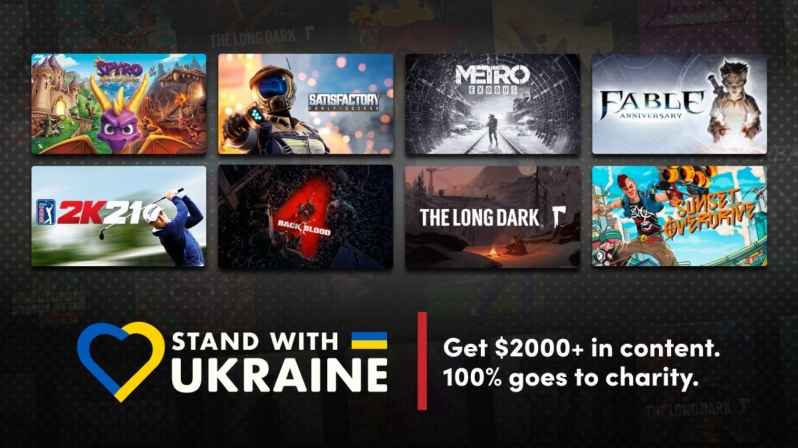 You can join the discussion on the Humble Stand with Ukraine bundle on the OC3D Forums.

dazbobaby
That is a truly enormous list.
Games, books, game creation content including models, comics, sound/music creation and so much more.Quote

KingNosser
It's good if you don't have many of them otherwise it's a dono but not a bad bunch of games.Quote

Peace Đ
Considering that a lot of people would say that Spyro, Satisfactory and Back4Blood alone are well worth the price, I'd say it's pretty much a nobrainer.


But I have a lot of those games already and especially Supraland has a huge place in my heart. RPG Maker XV and even MAGIX Music Maker EDM edition are cool add-ons that I'd like to tinker with.


I'll get it today. The only problem is that you can't activate all Steam games in a single run, because the system will block you after too many activations for some time xDQuote