After a backlash for PC gamers, IO Interactive and Epic Games have announced that they are working together to ensure that Hitman 1 and Hitman 2 owners on Steam will be able to access the content of those games within Hitman 3 at no additional cost on the Epic Games Store.

Hitman 3's ability to replay content from the two prior games is a key selling point for the title, effectively remastering the first two games with improved visuals, new features, and improved performance on some platforms. Better still, Hitman 3's install size will be smaller than that of Hitman 2, even though it will include three games worth of content. In an era where HDD and SSD storage is at a premium, Hitman 3 effectively shrinks the modern Hitman trilogy.

At this time, it is unknown how Epic Games and IO Interactive plan to allow Epic Games Store users to use the Steam versions of Hitman 1 and Hitman 2 to access their content within Hitman 3. Additionally, IO Interactive didn't announce that this fix would be in place at launch, which means that PC gamers may have to wait to access Hitman 2's content for free.

Thankfully, Epic Games has already given away free copies of Hitman 1 on their storefront and promises to give Epic Games Store purchasers access to Hitman 1's Game of the year content for free to those who pre-order Hitman 3 on the Epic Games Store. This offer also applies to those who purchase the game within the first 10 days of the game's launch. 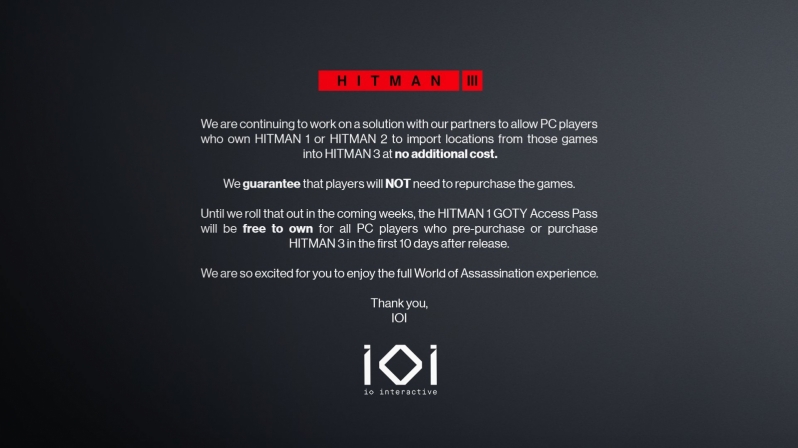 IO Interactive has confirmed that they are working with Intel to optimise the PC version of Hitman 3, which will help IO Interactive achieve higher performance levels on processors with high core counts and help the developer add ray tracing to the game later this year.

You can join the discussion on IO Interactive and Epic Games working to deliver Hitman 1 and 2's content to Hitman 3 on PC for free to existing owners on the OC3D Forums.

Greenback
Well unless it's in the first 10 days I'll give it a skip untill steam and a sale, as they give no time line for when, it could be 6 months or a years time or for free a week before it releases on steamQuote
Reply