Is your system ready? - Here's what you need to run Rainbow Six Extraction on PC

This game will support Nvidia's DLSS and Reflex technologies on PC

Is your PC ready for Rainbow Six Extraction?

On PC, Rainbow Six Siege will be launching on Ubisoft Connect, via PC Game Pass, and through the Epic Games Store. Owners of Rainbow Six: Extraction will receive a "buddy pass" that will allow them to invite two players to play extraction with for 14 days. After buddy passes expire, all players will need to own a copy of extraction to play the game. Co-op will be available for gamers across all platforms, allowing PC gamers to play with console players.

The good news for PC gamers is that Rainbow Six Extraction's minimum system requirements are low by today's standards, with the game supporting older 4GB graphics cards like AMD's RX 560 and Nvidia's GTX 960. That said, gamers will need the 4GB versions of these graphics cards to run Rainbow Six: Extraction. Annoyingly, Ubisoft has not provided PC gamers with framerate targets for these system configurations. 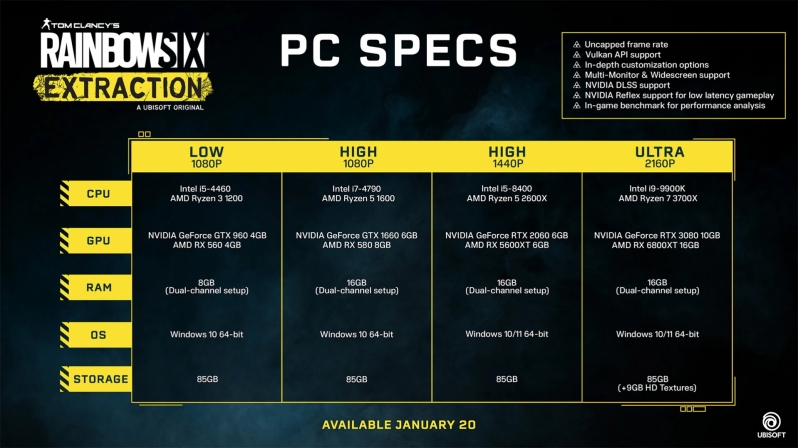 You can join the discussion on Rainbow Six Extraction's PC system requirements on the OC3D Forums.