It looks like Ray Tracing support is coming to Death Stranding

Would you like to see ray tracing come to Death Stranding?

Rumour has it that Death Stranding's getting a ray tracing update, improving the visuals of the Kojima Production's genre-defying epic. New branch listings called "qa-rtdbg", and "qa-nortdbg" have appeared on SteamDB, and were spotted by a fan called @AtelierTool on Twitter.

While the RT notation in these new branches appear to imply that ray tracing is coming to Death Stranding, it is worth noting that Death Stranding's Definitive Edition has been available on PC for a while, and that fact alone makes a new ray tracing update seem like a strange addition to the game. It is unclear how Kojima Productions would or are planning to utilise ray tracing in Death Stranding, or in what ways ray tracing could be used to dramatically improve the game's visuals. 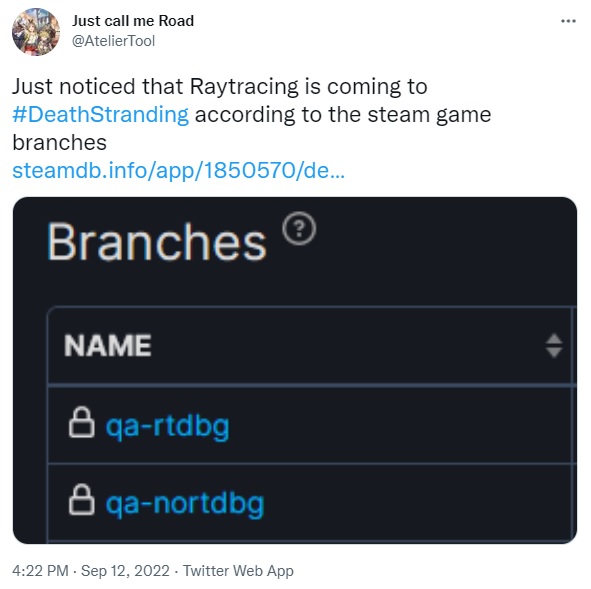 Kojima Productions have confirmed that they will be present at TGS (Tokyo Game Show) this week, and Intel has already confirmed that Death Stranding Definitive Edition will support the company's XeSS upscaling technology at some point in the future. More updates are coming to Death Stranding's PC version in the future, though it remains to be seen if ray tracing is one of Kojima Productions' planned upgrades.

Personally, I would like to see AMD's FidelityFX Super Resolution 2.0 technology come to Death Stranding, as it would add support for upscaling for users of graphics cards outside of Nvidia's RTX ecosystem. While XeSS will be a welcome addition, it is worth remembering that Intel said that this update would be coming in "Summer 2022", a time that has now passed. It seems like Kojima Productions needs Intel's permission to launch Death Stranding's XeSS patch, and who knows when Intel will be ready for that.

You can join the discussion on Death Stranding's rumoured ray tracing update on the OC3D Forums.

Dicehunter
I used the latest version of Pascal i.e Marty Mcfly's RTGI shader for reshade in this and it makes a nice moody difference, I imagine a properly implemented version possibly with RT reflections for the many metallic/glass surfaces and water would also greatly add to the atmosphere.Quote
Reply