An open beta will be made available this summer

Turtle Rock Studio's Back 4 Blood is a Left 4 Dead successor in all but name, and it was due to deliver gamers a tonne of co-op zombie-slaying action when the game launches on June 22nd.

Now, Turtle Rock has confirmed that Back 4 Blood has been delayed until October 22nd,  giving the studio four months of additional development time to polish and otherwise improve their game.

Back 4 Blood is a co-operative first-person shooter where teams of up to four players battle against Ridden (zombies/infected) across a series of narrative campaign missions. The game also contains a competitive multiplayer mode, where players can take control of human or Ridden as they battle against each other.

Back 4 Blood is a thrilling cooperative first-person shooter from the creators of the critically acclaimed Left 4 Dead franchise. You are at the center of a war against the Ridden. These once-human hosts of a deadly parasite have turned into terrifying creatures bent on devouring what remains of civilization. With humanity’s extinction on the line, it’s up to you and your friends to take the fight to the enemy, eradicate the Ridden, and reclaim the world.

This summer, Back 4 Blood will have an Open Beta, allowing gamers to try out Back 4 Blood before the game launches. This pre-launch beta will also allow Turtle Rock Studios to gather additional data for the game to help improve the experience. 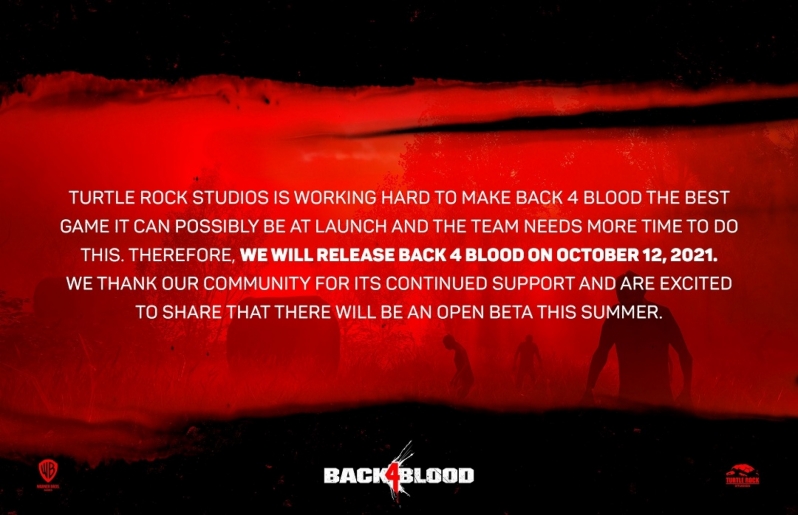 Back 4 Blood is currently due to release on October 12th, arriving on PC through Steam and the Epic Games Store.

You can join the discussion on Back 4 Blood's release getting delayed until October 2021 on the OC3D Forums.