A cross-platform API for the next generation of gaming

Microsoft has just announced DirectX 12 Ultimate, a feature set which will power the next-generation of gaming experiences across Xbox Series X and Windows PC.

What Does DirectX 12 Ultimate Include?

VRS is a feature which can be used to lower GPU load intelligently, enabling increased framerates by allowing developers to dedicate high precision rendering to where it is necessary. 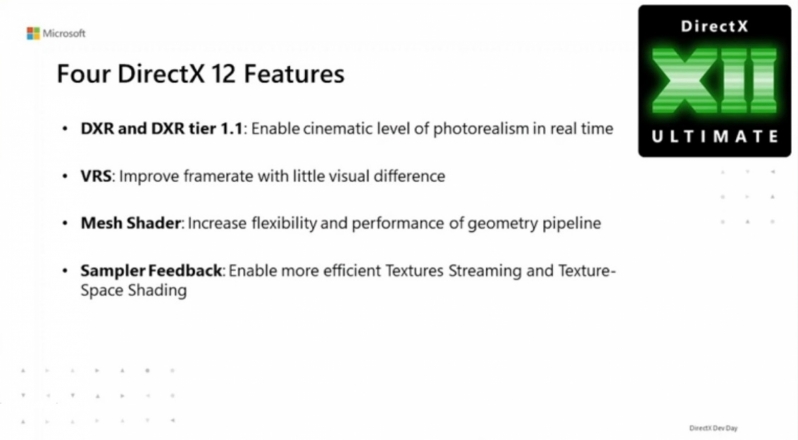 DirectX Ultimate brings Xbox Series X and PC together with a combined feature set, allowing developers to adopt the standards of next-generation systems across PC and Xbox at a record pace.

This feature set ensures that developers can target a large number of gamers with the latest DirectX features, removing the fragmented nature of DirectX 12 by separating system into two categories, DirectX 12 Ultimate Complaint, on not.

You can join the discussion on Microsoft's DirectX 12 Ultimate API on the OC3D Forums.

NeverBackDown
Just means current-gen consoles/non-RTX will be a bigger pain to optimize for since they will have to manage two versions of the API since feature sets will be different. I could see PC being less of an issue, can have these new features as options and automatically disabled if the hardware is not compatible, and leave it up to users with the newer cards.

For everything else, it's great and keeps fragmentation lower.Quote

Avet
Why would they bother optimizing for old consoles? PC is more flexible. Probably there will be two versions of the game. DX12U, and DX12. One version for consoles and RT PCs, and other for non-RT PCs. Doom has Vulkan, and OpenGL versions. Just run different .exe file and that is it.Quote

NeverBackDown
Quote:
Why would they bother? Is that really a question?

Nevermind I prefer an Assassins Creed Unity style of optimization for all my console releases.

You do know they release games for both old and new consoles for a few years right? You also know that just because you make a .exe file that it doesn't solve anything because that is not how it works?Quote

grec
Yeah, many game engines can toggle APIs via in-game menu's nowadays, surely switching from DX12 to DX12U will essentially amount to switching some graphics features off given most AAA games are/would already support the Ultimate features, and the dev work to support both isn't particularly more than supporting both DX12 and DXR within a game now.

More or less every triple A game is already requiring support for at least 3 different API's and an optional extension right now already with the slit Xbox/PC APIs so it's still less work than the current system for a multi-plat title.Quote

NeverBackDown
Yes as I said it for PC its not as big of an issue, my post was talking about making it more complex for current gen and next gen consoles. It would make it more difficult since they are so vastly different seeing as they are far older. Less so for Xbox since they already use DX12 unlike PS.Quote
Reply