Microsoft is set to acquire ZeniMax for $7.5 billion

Microsoft's $7.5 billion deal would need to pass regulatory scrutiny, but now both the EU Commission and America's Securities and Exchange Commission (SEC) have approved the deal. With these approvals, Microsoft can now complete the acquisition without any major delays.

This acquisition brings nine developers under the Xbox Games Studios banner alongside franchises such as  The Elder Scrolls, Fallout, Wolfenstein, DOOM, Dishonored, Prey, Quake, Starfield and more. In short, this acquisition will have a huge impact on the console gaming landscape, giving Microsoft a vast library of IP to play with.

At this time, it is unknown how this deal will impact Bethesda's existing "console exclusivity" agreements with Sony, which will see Deathloop and Ghostwire: Tokyo as PlayStation 5 console exclusives at launch. These exclusivity deals will likely continue as planned, though future Bethesda titles could release as Xbox exclusives.

Future Bethesda titles are now expected to be exclusive to Xbox and PC, removing a vast library of future games from Sony's PlayStation consoles. That said, it is probable that all currently announced PlayStation 5 games from the publisher will still come to the system, as Microsoft has honoured the platform commitments of all of their recently acquired studios so far. 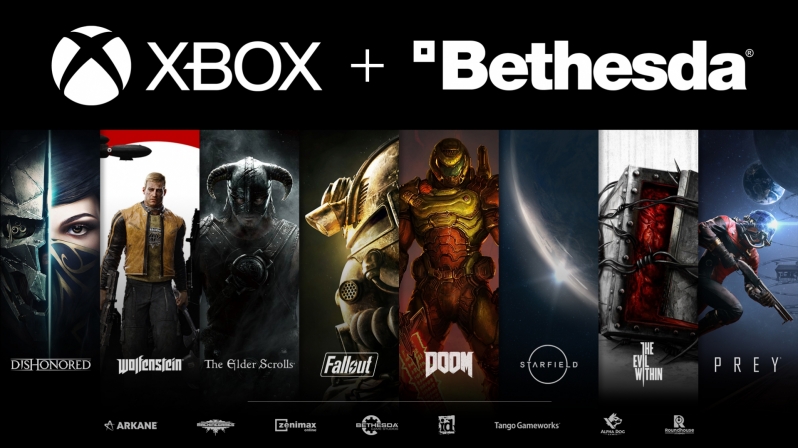 Right now, Xbox Game Studios is made up of fifteen developers, and adding Bethesda's nine studios into the mix increases that number by 60%. This will allow Microsoft to release more Xbox exclusive titles and dramatically increase the value proposition of services like Xbox Game Pass.

When this acquisition finished, Microsoft will no longer be behind Sony when it comes to first-party IP, though it will be a while before we see this deal impacting the Xbox brand as a whole.

You can join the discussion on Microsoft's acquisition of ZeniMax being approved by the US and EU on the OC3D Forums.

NeverBackDown
Outside of Fallout and Elder Scrolls PS gamers can still say but xbox has no games.

Console player don't bother with any of those other ones. Sales didn't last or get that high and certainly even on 2 platforms most of Sony's IP has outsold those games on 1 platform alone.

Quality over quantity. Sony just so happens to have both.

It will suck not getting ES though. And that alone might be enough or a few people...Quote

looz
Now all MS needs to do is get hold of all copies of Gamebryo source code, stack the drives and burn the whole thing.Quote
Reply