This is a gamechanger for Windows 10

Windows 10's Microsoft Store is a disaster; its user interface is terrible, its downloads can be buggy, and the store's policies are not appealing to app makers. If Microsoft wants the storefront to become successful, it has to change, and according to Windows Central, that's what Microsoft's planning to do.

Rumour has it that Microsoft's planning to build a brand new App Store for Windows 10, arriving as part of the company's plan to revitalise Windows 10. With the new App Store, Microsoft will remove many of the restrictions which have long frustrated developers and users.

Microsoft is alleged to be opening up their Windows 10 Store to unpackaged Win32 applications, bringing an end to UWP's dominance on the storefront. Apps will also be allowed to update without using Microsoft's store-driven update structure, allowing applications to update themselves. Developers can also use the Microsoft Store without using Microsoft's commerce platform, a move that appears to be an industry first.

With these changes, Microsoft will attract applications like Zoom and packages like the Adobe Creative Suite to the Windows 10 Store, giving PC users a reason to utilise Microsoft's Storefront. This change may also allow PC games to be delivered to gamers without Microsoft sealing them within a cage of encryption. These changes could make games from the Microsoft Store/Xbox Game Pass moddable, which would be a major boon for Xbox Game Pass for PC.

Alongside changes to the Windows Store's UI, install experience, and download structure, Microsoft's policy changes will give developers little reason to continue avoiding Microsoft's storefront. Microsoft's changes could make applications like Google Chrome and the Adobe Creative Suite available through the Microsoft Store, making these apps more accessible and easier to install. 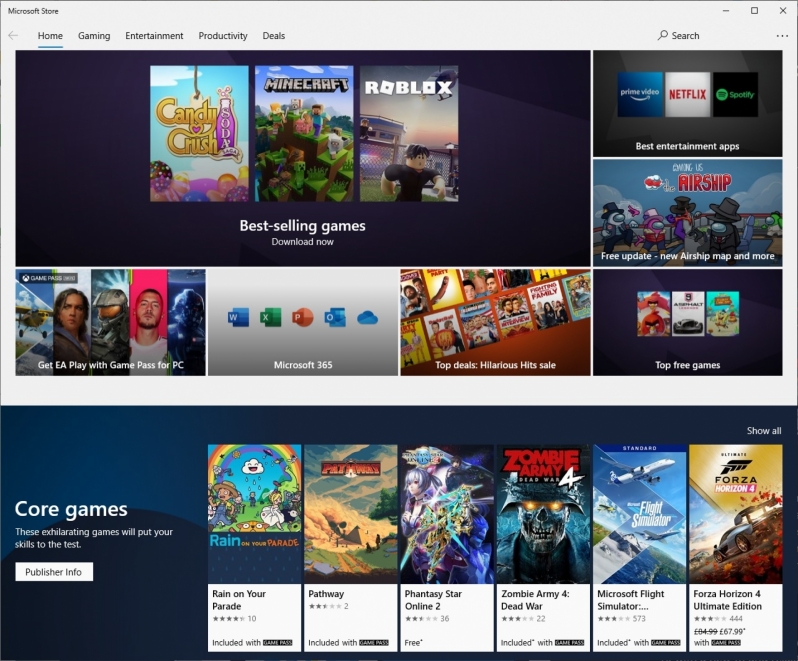 Microsoft's reportedly planning to launch their new Windows Store this Fall, but only time will tell if Microsoft's changes will be enough to make the Windows 10 Store a success.

You can join the discussion on Microsoft's plan to redesign its Windows 10 App Store on the OC3D Forums.

KingNosser
I've always disliked the store, espeically when they use it to patch windows in the past what is the point of windows update if they don't use it for that sole reason.

It works but like most things it could be a lot better.Quote

By making things more modular they can update independent frameworks without needing a full update that requires a restart. You can make this happen with security updates or app updates reserving actual OS related modules/kernel to a full blown required restart and takes a few minutes.

This allows for faster and easier updates which makes it more likely to be updated on more devices, reducing the amount of versions installed which makes debugging easier for customer support and just plain making things simpler for development. Which then leads to less bugs.

Very excited for this change. Would be nice if they allowed you do what GoG does and show different storefront games where you can launch from one store.Quote

ET3D
This could change the app store from an undesirable feature to a very useful one. It would certainly be nice to have a one stop shop to get all software. Of course, developers will need to get on board, but with all limitations gone, that's more likely to happen.Quote
Reply