It looks like Musk's trying to lower Twitter's value

Elon Musk's $44 billion deal to acquire Twitter could be on the verge of failing, as the billionaire has claimed that his deal "cannot move forward" until Twitter addresses his concerns regarding spam on the platform.

Recently, Twitter claimed that 5% of accounts on the platform were fake or spam, and Musk has publically asked Twitter to show proof of this data. So far, Twitter has refused to supply their proof, leaving Musk to question Twitter's data.

Why is this important? If Twitter has more spam on its platform than was disclosed, Twitter would immediately become less valuable to potential buyers. If a larger portion of Twitter's active users are spam/bot accounts, that means that Twitter has fewer legitimate users than claimed.

At this time, it is unknown what Musk is doing by publically throwing his Twitter acquisition deal into question. Should Musk fail to acquire Twitter, he will have to pay a $1 billion termination fee. That said, Musk's manoeuvring could allow him to re-negotiate and lower his buying price for Twitter, but this move leave Twitter's investors with a much lower pay-off. Musk's $44 billion offer is a generous one, and if Musk publically throws Twitter's value into question, he could lower his buying price and discourage other would-be buyers. 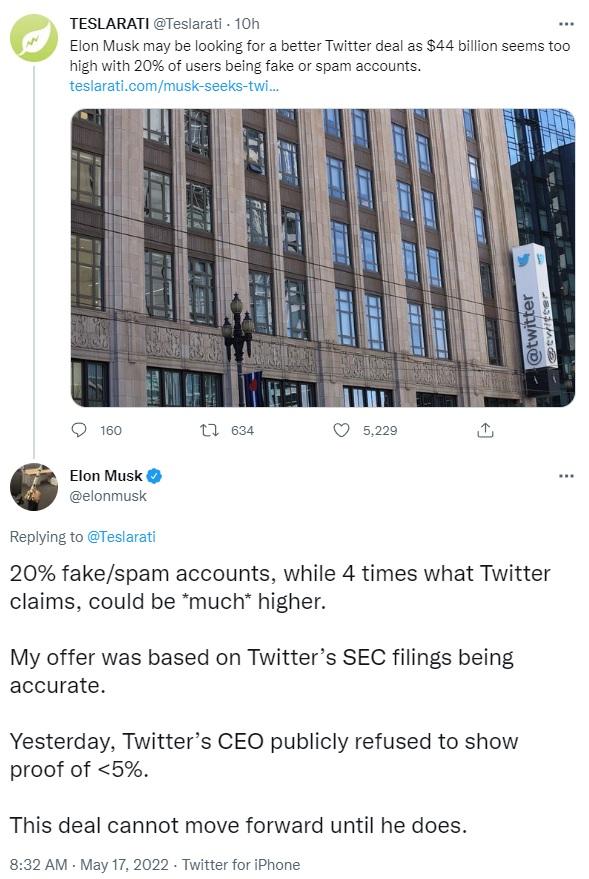 If Musk's deal to buy Twitter closes, Twitter will become a privately owned company under him. This change will give Musk the power to do what he wants with the platform, allowing him to attempt to unlocked the company's "tremendous potential". Part of his plans for Twitter is to crackdown on bots and spammers, citing it as a key goal for the platform under his ownership.

Should Twitter prove to have more spam/fake accounts on the platform than claimed, Musk has many reasons to reconsider his $44 billion price for Twitter. For starters, if more users are spam accounts, Twitter has fewer active users than claimed who are real people. That calls the value of Twitter's advertisements into question and that can financially hurt the platform. Musk claimed that his a deal is "not out of the question" at a different price.

You can join the discussion on Musk stating that his Twitter deal "cannot move forward" without spam evidence on the OC3D Forums.