With patch 1.27, Nvidia promises a performance boost of up to 45% at 4K within the game (when DLSS is set to performance mode), delivering to PC gamers a much smoother experience on RTX series graphics cards. At Max settings, this is enough to push most high-end RTX series graphics cards past the  60 FPS mark at 4K, and deliver even higher framerates at more moderate resolutions like 1440p.

Below is a video from Nvidia which details the performance impact of DLSS in Red Dead Redemption 2.

With more optimal graphical settings, Red Dead Redemption 2 should reach framerates that are far in excess of 60 FPS at 4K on most higher-end RTX series GPUs with DLSS enabled. Our original performance analysis of Red Dead Redemption 2's PC version has already proven that settings like Volumetrics Quality can deliver a notable performance increase on PC with a minimal impact on image quality, and other settings adjustments can deliver similar results.

With DLSS, graphics cards like Nvidia's RTX 3080 and RTX 3080 Ti might be able to target 120 FPS framerates at 4K, giving owners of all of those new 120Hz 4K TVs something incredible to gaze upon. Xbox One X delivered Red Dead Redemption 2 at 4K 30 FPS, but with modern GPUs and DLSS, PCs can target much loftier targets. 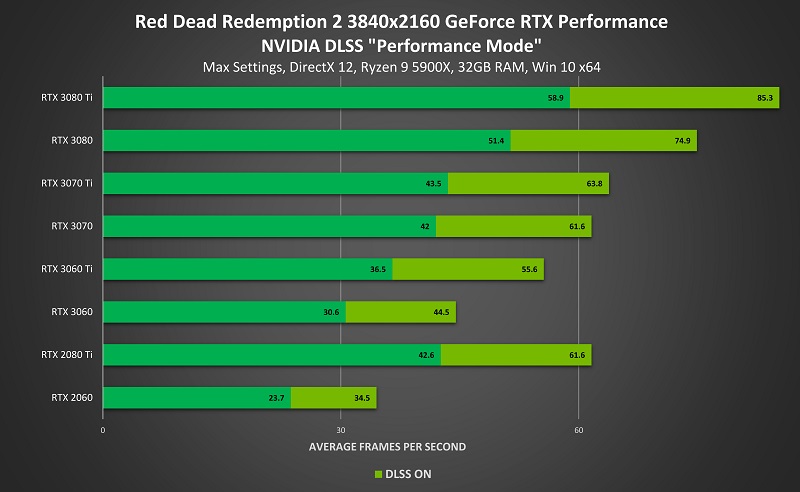 In most of the games that we have tested, Nvidia's DLSS technology is effectively magic, delivering heightened performance levels with high levels of image quality. In some games, high DLSS settings can provide improved levels of graphical fidelity and higher framerates, though DLSS' impact on image quality varies on a game-by-game basis.

You can join the discussion on Red Dead Redemption 2's DLSS update on the OC3D Forums.