Reflex is one of Nvidia's most undersung technologies

Nvidia's Reflex technology is one of Nvidia's most undersung innovations, promising gamers lower system latency and more responsive controls in supported games. While initial interest in the technology came from creators of competitive shooters like Apex Legends, Valorant and Fortnite, the benefits of Nvidia's Reflex tech are not exclusive to these games. Most game would benefit from snappier controls, and improved response times.

At CES 2022, Nvidia showcased its Reflex technology running in God of War's upcoming PC version, showcasing how faster response times can result in more precise dodges, easier combos, and better timed jumps. Lower latency controls can deliver a better gaming experience, and that's why Nvidia's Reflex tech is starting to be introduced into games outside of the competitive shooter genre.

2018’s God of War is one of the best action games ever made, with engrossing characters, an excellent story, a mesmerizing world to explore, and dazzling battles and sequences. On January 14th, the PC edition goes live, featuring enhanced graphics, exclusive PC features, HDR, our AI-powered performance accelerating NVIDIA DLSS technology, and the latency-optimizing NVIDIA Reflex.

God of War’s fast action and spectacular combos are key to overcoming the game’s most difficult challenges. If your PC’s system latency is high, gameplay feels sluggish and controls are unresponsive. Combos are harder to chain, tricky jumps are mistimed, and the experience feels slow.  NVIDIA Reflex will deliver responsive gameplay allowing you to beat the boss with tighter dodges and combos.

At CES, Nvidia announced that their Reflex technology will be integrated into iRacing, Tom Clancy's Rainbow Six Extraction, God of War, Midnight: Ghost Hunt, GRIT, Ready or Not, and Super People. All of these games are due to be released in the near-term future, with Sony's God of War arriving on January 14th.

Most players prefer to be battling the boss, not their PC. Responsive games are more immersive, less frustrating, and enable players to be more precise with their inputs. For this reason, competitive shooters have quickly latched onto NVIDIA Reflex low latency gaming, with over 20 competitive shooters supporting the technology. But platformers, fighting games and sims benefit from the same reduction in system latency. 7 more games with Reflex are on the way, extending our low latency gaming technology into new genres.

You can join the discussion on Nvidia's Reflex technology getting adopted outside of the competitive shooter scene on the OC3D Forums. 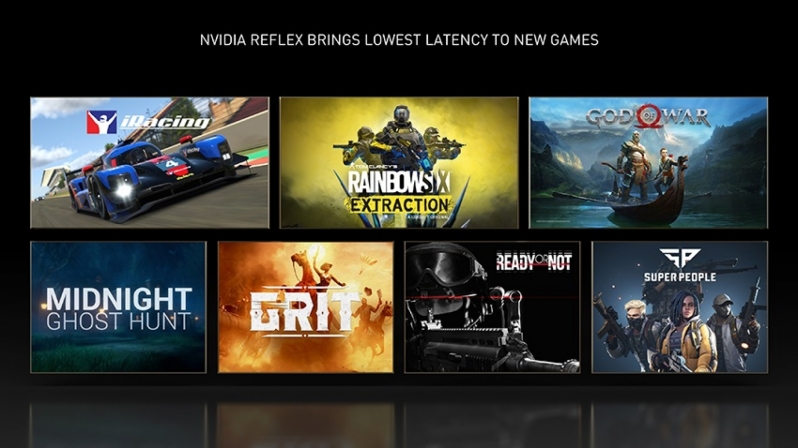