Nvidia's Marbles Tech RTX Demo is one of the company's strongest showcases for both ray tracing and DLSS, showcasing real-time path-traced visuals that can be rendered in real-time with movie-like detail. Now, this demo is fully playable, allowing PC gamers to run Nvidia's tech demo at home on their RTX-powered PCs.

This Tech Demo is now available to free to users of Nvidia's Omniverse platform, which currently be used by PC gamers and hobbyists to have a look at Nvidia's latest technologies. Gamers will need to sign up to use the application with their Nvidia account, but once that hurdle is passed, Nvidia's Marbles Tech Demo will be easy to access.

Nvidia's Omniverse Marbles RTX tech demo is a physics-based demo that is entirely path-traced. The demo works on all RTX graphics cards and is designed to run on Windows 10 PCs.

So far, Nvidia has showcased this demo with both Turing and Ampere graphics cards, demonstrating the benefits of Nvidia's RTX feature set. With the launch of this demo, gamers can finally see this tech demo running on their hardware, confirming that Nvidia's RTX showcase was legitimate.

You can join the discussion on Nvidia's Marbles Tech Demo being available to download on the OC3D Forums. 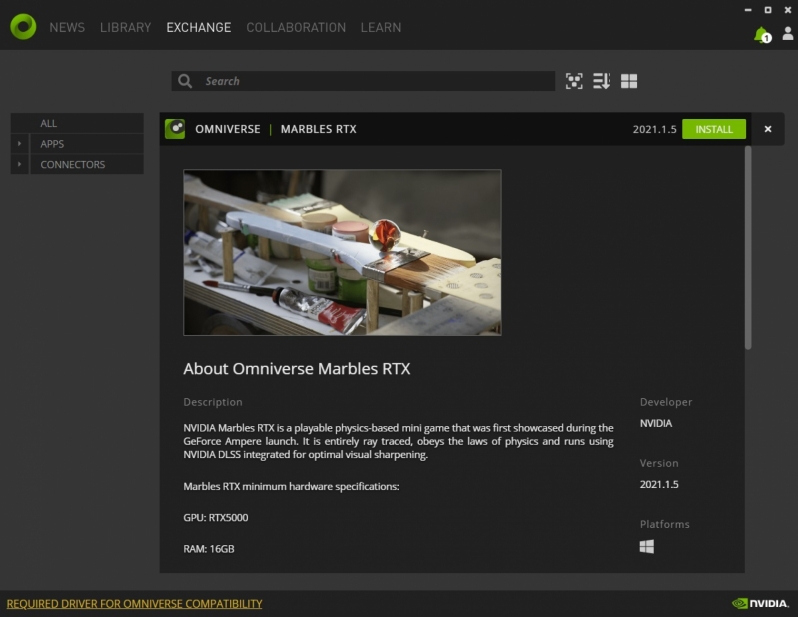 Warchild
Quote:
I didnt see any DLSS in use tbh. Although some sections are buttery smooth. The moment you switch to the flaming marble its 10fps across the board...Quote
Reply