DLSS will be a critical feature for Nvidia within Battlefield 2042, as it will give Geforce RTX users a major performance advantage over users of non-Nvidia graphics cards and non-RTX Nvidia Geforce GPUs. Assuming DLSS is implemented well, the feature can enable higher framerates with high fidelity visuals. That's good news for anyone who's targeting high framerates at high resolutions.

Below is what Nvidia had to say about their new Battlefield 2042 PC trailer with RTX.

Only a GeForce RTX GPU will deliver the definitive Battlefield 2042 PC experience. Accelerate performance with the critically acclaimed NVIDIA DLSS, enhance image quality with ray-traced ambient occlusion, and optimize system latency with NVIDIA Reflex. And through GeForce Experience you can download and install our Battlefield 2042 Game Ready Driver with just a few clicks.

Battlefield 2042 is made up of three distinct multiplayer experiences - All-Out Warfare features the next generation of fan-favorite modes Conquest and Breakthrough; Battlefield Portal allows players to discover battles from the past, present and future as well as to creating and change the rules of war; while Battlefield Hazard Zone brings a tense, squad-focused survival experience. Adapt and overcome on dynamically-changing battlegrounds with the help of your squad and a cutting-edge arsenal, and prepare for unprecedented scale with up to 128 players*.

You can join the discussion on Nvidia's Battlefield 2042 RTX trailer on the OC3D Forums. 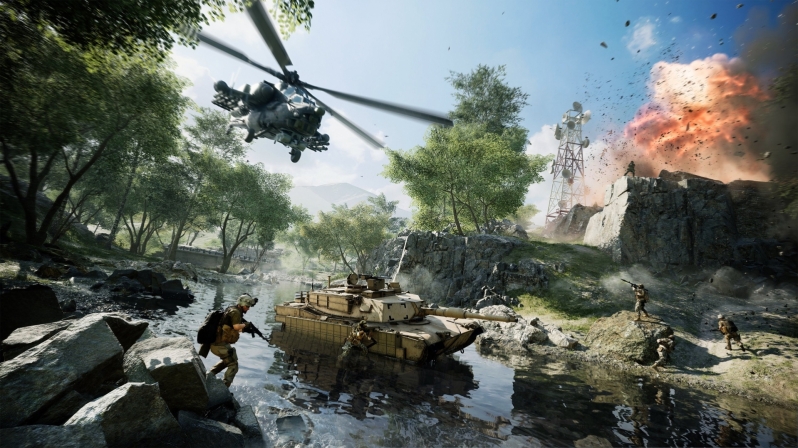 Dawelio
Kinda horrible trailer to be honest, several clips that were cinematic ones from the reveal trailer of the game several months ago.

On top of this, several clips were massive frame dips, during the showcase of this technology. Not the best trailer for the game and/or feature of it.

It has been roasted in the comments on Youtube as well.Quote

Warchild
Quote:
Yet it will still sell like hotcakes, because its a change on the WWII themed previous iterations.Quote
Reply