The VXGI 2.0 SDK is coming this month, Unreal Engine 4 integration is coming later

Nvidia's VXGI 2.0 session is now available to view within the GDC vault, giving outsiders a glimpse of what the new technology brings to the table.

VXGI is a short-hand term for Voxel-based Global Illumination, a technique which is used to create realistic lighting within 3D graphics engines. With the creation of VXGI 2.0, Nvidia has reduced the hardware requirements of the technology while also providing an uplift in overall quality with the addition of several new features.

The first of these new features is Voxel Area Lights, a tool which Nvidia plans to release as part of VXGI 2.0 and as a dedicated VXAL API, giving developers plenty of options for adjustment and usage.

Right now VXGI is not used in any shipping games due to its high hardware requirements, though a similar tool called VXAO (Voxel-based Ambient Occlusion) has been used to leverage voxels to provide world space ambient occlusion by utilising the opacity of game objects and similar processing techniques to VXGI. Since no lighting is processed VXAO, it is a lot less compute-intensive than VXGI, making it easier to use in today's games. Today Rise of the Tomb Raider and Final Fantasy XV have VXAO options on PC.

One of the most noteworthy upgrades to VXGI 2.0 is the addition of One-Pass Voxelisation, combining opacity and emittance passes to decrease the compute cost of the technique significantly. This change halves the CPU cost of the VXGI and can have an almost 2x decrease in GPU cost while offering the same level of quality as VXGI 1.0. 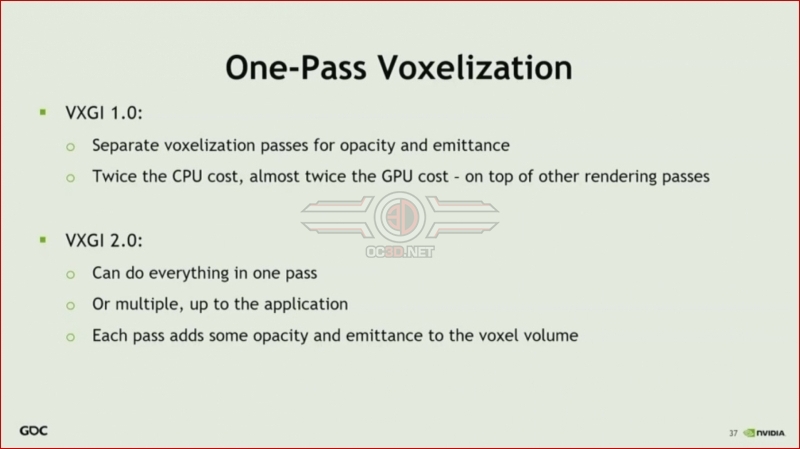 In VR VXGI can also be used to re-use data from the same frame when using VXGI on a different viewport, which is a useful technique for VR developers who want to utilise the feature across two viewports. This feature will reduce the compute requirements of VXGI in VR applications, making it easier for developers to maintain high framerates. 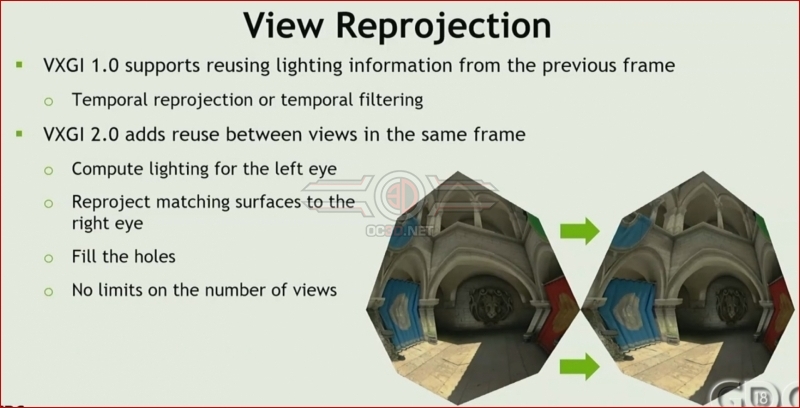 Nvidia has also created simplified Voxel formats that can offer higher levels of performance while maintaining the same levels of quality, again making VXGI easier to run in real-time graphics engines. Nvidia's new FP16 atomics are supported on Maxwell or newer graphics hardware, though there is a method to allow these FP16 floating point calculations to be supported by older hardware.

VXGI will be released later this month as a new SDK for developers, with VXAL also coming as an independent SDK. Unreal Engine 4 will also integrate VXGI later this year, bringing the feature to countless developers across the industry.

You can join the discussion on Nvidia's VXGI 2.0 technology on the OC3D Forums.

TheF34RChannel
That has been spoken of for years, am I correct? Good to have it emerge from the sludge.Quote

WYP
Quote:
The problem has always been how compute intensive it was, so hopefully this update will make it usable. Screen Space effects have their downsides, though it is hard to deny how much they offer for their hardware requirements.

It will be interesting to see if this is ever used in a game. As fancy as the technology is if the compute requirements are too high it will only cause people to complain about it.Quote
Reply