Sometime this week, Machine Games' Wolfenstein: Youngblood will receive support for both raytracing and DLSS, allowing PC gamers to enhance the game's visuals with ray-traced reflections and boost their framerates with Deep Learning Super Sampling.

The trailer below highlights the enhancements that raytracing will bring to Wolfenstein Youngblood.

In this release, Nvidia RTX graphics card users have the option to select one of three DLSS quality modes, with Machine Games offering options for "Quality, Balanced and Performance". These settings will control the baseline rendering resolution of DLSS.

When Wolfenstein Youngblood's RTX patch released, we plan to have a look at these DLSS modes and how they impact Wolfensteins visuals.

Nvidia has claimed that "Wolfenstein: Youngblood highlights many of the improvements in image quality and performance we’ve made with DLSS over the course 2019" while promising that they will be working on "further improvements" in 2020.

We will investigate these claims when Wolfenstein Youngblood gains DLSS support, as we would love to see DLSS live up to Nvidia's original quality claims. 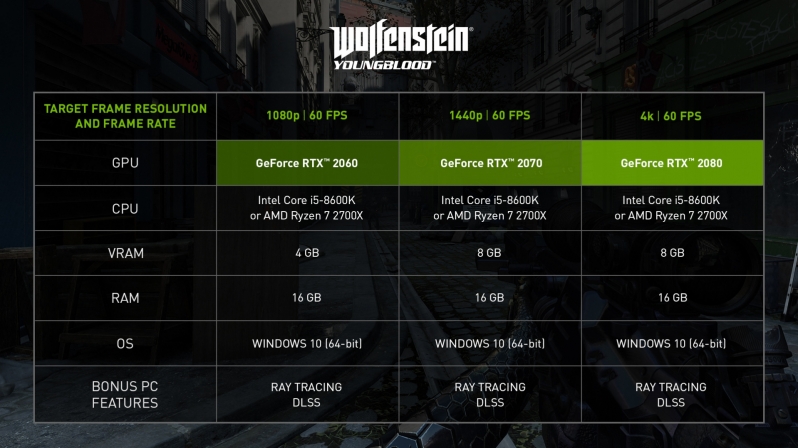 You can join the discussion on Wolfenstein: Youngblood's RTX support on the OC3D Forums.

Bagpuss
Seems to be alot of fuss over such a mediocre, already forgotten, bargain bin game.Quote

Dicehunter
Quote:
Indeed, But the co-op is meant to be quite fun from what I've heard.Quote

AlienALX
Fun if you like the peg game apparently.

I was so annoyed at the idea of constantly switching ammo I didn't even play it. What a way to waste £27.Quote

Warchild
im looking forward to the RTX patch for Mech 5. I do like that game.Quote

TheF34RChannel
Quote:
Personally I'm not fussed about the implementation into, like you said, already forgotten and horrendous game(s). To me RT(X) is still an overpriced fail. DLSS (what I looked forward to most) is even worse, it seems. Still haven't upgraded my 1080 because what with and what for...Quote
Reply