Test the performance and stability of your processor with one tool

OCCT has been updated to version 9.0, making one of PC's most popular stress-testing tools even more useful. Now, OCCT contains benchmarking tools, allowing users to test their processors' single-threaded and multi-threaded performance.

What's even more useful is that OCCT has split its benchmarking tool between AVX and Non-AVX workloads, allowing the tool to highlight modern processors' SSE and AVX performance. With AVX offsets being popular options for Intel overclockers, OCCT's inclusion of dedicated SSE and AVX tests should prove useful when testing overclocked processors.

One of OCCT's new benchmark highlights is its ability to upload results online, allowing users to compare their system's performance to other users and verify that their processor is achieving performance levels that are similar to the same processor in other systems. Information is collected via the HWiNFO API to log additional data on OCCT's benchmark utility, allowing users to monitor CPU frequencies, thermals and more.

Below is a video from the creator of OCCT on OCCT version 9.0

Version 10.0 of OCCT is already in the works, and version 9.0 is available now from OCCT's website. Below is the changelog for OCCT version 9.0.0.

- Added Benchmarks for CPU and Memory to OCCT !
- Added a graph bar to the benchmarks for comparison purposes
- Added meaningful tooltips to the graph’s bars so you can know quickly what’s going on
- OCCT now uploads all monitoring data along with the system information to ocbase
- Major UI refresh
- Major bugfixes and improvements
- Fixed some shadows feeling out place
- Added a scrollbar in the settings screen
- Prevented tab change in all cases when a test is running
- Update HwInfo to 7.05
- Improved parsing of Motherboard properties
- The “Fixed” thread mode doesn’t force thread affinity anymore – this allows this mode to follow CPPC preferred core mechanism. The drawback is you don’t know, in this mode, which core produced an error
- Added “–cpu-benchmarks” and “–memory-benchmarks” command line switches to add benchmarks to the current schedule 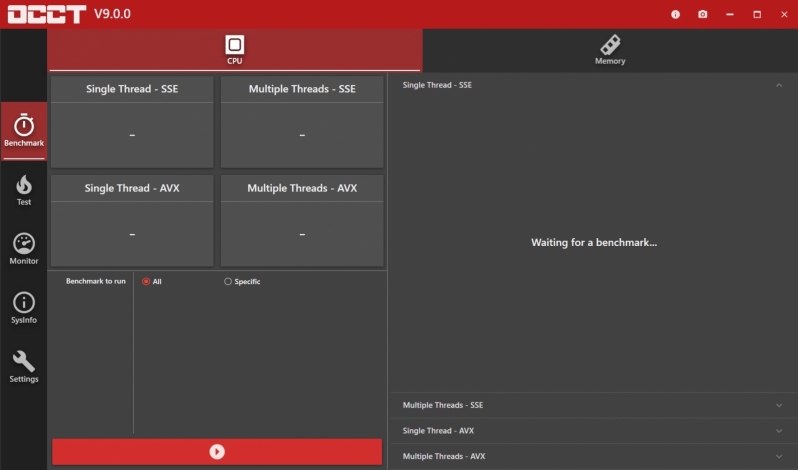 You can join the discussion on OCCT V9.0 adding a new benchmarking utility on the OC3D Forums.