Expect AI Tzeentch factions to be much less annoying

With patch 1.3, several adjustments have been made to Total War Warhammer III's Realm of Chaos segments, making these segments less tedious, and several character and skill tree updates have been made to make certain options more effective. The changes made with Patch 1.3 are too numerous to mention here, but below is a short summary. More detailed patch notes for Total War Warhammer III's patch 1.3 are available here.

- Regiments of Renown II introduces a whole new set of elite troops to all seven factions—this time with a focus on mounted units!
- Land Battles have joined the ranked matchmaking queue!
- Miao Ying can now (properly) use her Eye of the Storm ability in combat
- Additional character trait reworks and skill tree updates for the Legendary Lords
- Several adjustments to make the Realm of Chaos less punishing or tedious
- Much-needed adjustments to how the AI Tzeentch faction utilizes Changing of the Ways
- Improvements to the Cathayan Formation Attack ability
- Fixes to the Kurgan Warband spawn rates during the Grand Cathay campaign
- Numerous improvements to unit responsiveness to orders and movement commands in battle
- AI improvements to their battle strategy, as well as fixes to prevent them from abusing skills and abilities
- Various fixes for player-reported issues and feedback notes
- …and more!

With Patch 1.3 PC gamers can expect Total War Warhammer III to stutter less often, as Creative Assembly has improved how UI assets are managed to reduce stuttering and framerate drops. This is especially true for long gameplay sessions. With patch 1.3, game performance should be more stable, and stutters should be a lot less frequent, that said, further performance optimisations are in the works to make Total War Warhammer III run better on PC.

Here is what Creative Assembly had to say regarding some of their recent UI stuttering fixes, including how some of patch 1.3's fixes are inspired by performance mods.

“Thanks to the amazing work of one of our community modders, Spartan VI, and their ‘UI Performance Patch’ mod, a stuttering issue was brought to our attention when hovering over components of the UI—particularly when you have multiple mods installed.

The root issue was caused when the game searches for UI modifications that are supposed to overwrite the base look of the UI. The stuttering occurs when the game cannot find a modified file in the manifest for the retail game data, at which point it broadens its search to search through the rest of the mod folders on the disk. The more mods you have installed, the more folders it has to explore and the more stuttering you experience as it does!

The workaround offered by the ‘UI Performance Patch’ was to duplicate the mod files in the initial search location—thus negating the need for additional searching and improving performance at the cost of duplicating data. The fix we’re implementing today goes one step further: creating a persistent reference of whether a modification exists in the initial file that gets searched. You’ll still experience stuttering the *first* time you encounter a new UI component, but it should only happen once and dodges the duplication of data in the game files.

This initial stuttering is something we’ll continue to work on in the future, so watch for those improvements later on! And thanks, again, to Spartan VI for helping others enjoy the game to its fullest potential!” 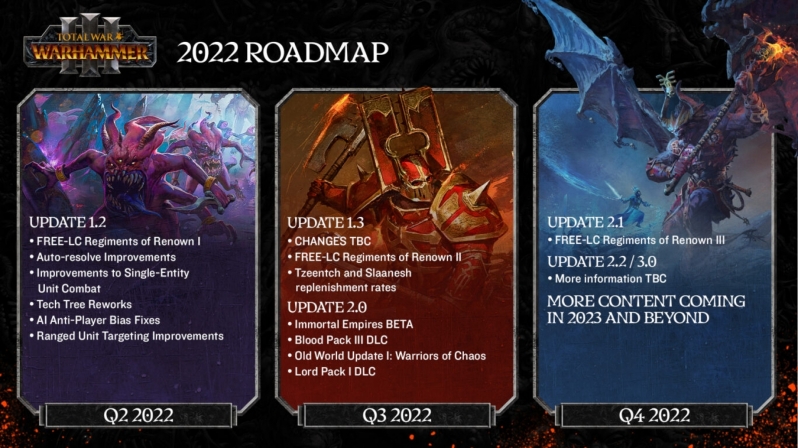 In August, Creative Assembly plans to release Total War Warhammer III's patch 2.0, which will add Immortal Empires to the game, the game's highly anticipated Blood pack, and more new content. Patch 1.3 lays down some of the groundwork for patch 2.0, and Creative Assembly plans to improve Total War Warhammer III further significantly before the launch of update 2.0.

You can join the discussion on Total War Warhammer III's patch 1.3 on the OC3D Forums.

NeverBackDown
That UI Performance Patch mod was a godsend for fixing stuttering. So glad they shout him out and took his fix a step further. Pretty neat just glad they finally got around to itQuote
Reply