Up to 7400MB/s read speeds are achievable

Phison were the first brand to deliver PCIe 4.0 SSDs, offering sequential read speeds as high as 5,000MB/s. This feat ensured that the company's E16 controller was used in practically all mainstream NVMe SSDs, at least until very recently,

Now, Phison has launched its PS5018-E18 controller, a second-generation PCIe 4.0 SSD controller which supports capacities of up to 8TB per drive and sequential read/write speeds as high as 7,400/7,000 MB/s. This feat makes Phison controller one of the fastest on the market,

Phison's E8 controller was designed from the ground up using TSMC's 12nm manufacturing process, using the company's proprietary CoXProcessor 2.0, offering SSDs more integrated CPU performance thanks to its use of a triple-core processor setup. The controller also fully supports the NVMe 1.4 specification.

When fully utilised, this SSD controller can deliver 1 million IOPS of performance, delivering leadership PCIe 4.0 performance. SSDs based on Phison's PS5018-E18 controller are due to release to retailers very soon.

Phison designed the new E18 from the ground up on the efficient TSMC 12nm process node. This provides SSD manufacturers with a state-of-the-art controller solution in an increasingly competitive field. The controller utilizes Phison’s proprietary CoXProcessor 2.0 technology, an innovative SSD architecture that enables E18 to deliver exceptional performance and power efficiency.

The Phison architecture is also primed for AI-Assisted storage, where its distributed architecture uses many small cores to perform the workload in parallel. The E18 is ideal for gamers, content creators, and computing enthusiasts, which demand the best experience. This ultra-low latency is possible only with NVMe SSDs.

The E18 maximizes use of the available bandwidth of PCIe 4.0 to improve sequential read performance up to 7.4GB/s and write performance to 7.0GB/s, making E18 the only solution in the market to break the 7.0GB/s on both read and write access. When fully utilized, the eight-channel E18 delivers up to 1 million IOPS and scales to a massive 8TB capacity. 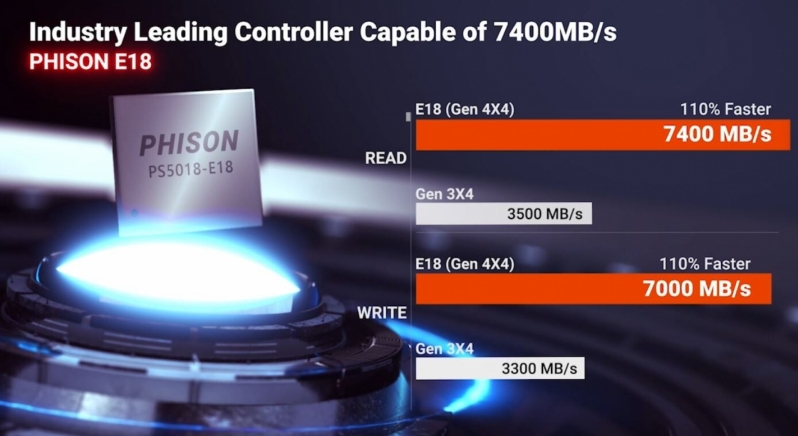