The Xbox Series S will run at 30FPS, initially

Next month is going to be a busy one for the games industry, with Microsoft's Xbox Series X/S systems and Sony's PlayStation 5 consoles launching worldwide to eager audiences.

PUBG Corp has confirmed that PlayerUnknown's Battlegrounds will be playable on all three next-generation systems at launch. Furthermore, PUBG will benefit from the strength of these next-generation systems, offering players smoother framerates and reduced loading times. That said, PUBG's next-generation support will be achieved using existing console builds for PUBG, and that's not good for Microsoft's Xbox Series S.

Is it really next-generation support?

Thanks to patch 9.1, the Xbox One X and PlayStation 4 Pro versions of PUBG now support a 60 FPS "framerate priority" option, while the baseline PlayStation 4 and Xbox One/Xbox One S remain capped to 30 FPS. This means that the Xbox Series S version of PUBG will also feature a 30 FPS framerate cap, limiting the game's performance.

PUBG Corp has confirmed that they are planning to add a "framerate priority" mode to the PlayStation 4 and Xbox One versions of PUBG; but at launch, the Xbox Series S will feature a 30 FPS framerate cap. The Xbox Series S has enough CPU and graphics horsepower to run PUBG at 60 FPS, but PUBG Corp's inability to create distinct next-generation versions of PUBG have prevented the game from fully taking advantage of the system.

A big question we’ve seen the last few months is what our plans are for PUBG on the next generation of consoles. Today, we’re happy to announce that PUBG will be playable on Xbox Series X, Xbox Series S, and PlayStation 5 from day one!

If you are a current-gen PUBG Console player, you’ll be able to continue playing the game on next-gen consoles at no extra cost with the same PUBG account you’ve been playing on all this time. All of your game account progress and cosmetics will carry over with no interruptions.

In addition to PUBG being playable from day one on next-gen, we will also be supporting cross-generation multiplayer alongside cross-platform play. This means that players on Xbox One, PS4, Xbox Series X/S, and PS5 consoles will be able to squad up and play against each other on the battlefield.

Please see below for specifics around performance and technical details:

The Xbox Series X will leverage the Xbox One X game build. The game will run at 60 FPS by selecting the Framerate Priority option*.

The Xbox Series S will leverage the Xbox One S game build, which runs at 30 FPS.  We are working to provide an option to raise the framerate cap on Xbox One S and Xbox Series S consoles in the future.

PlayStation 5 will leverage the PlayStation 4 Pro build. By selecting the Framerate Priority option*, the game will run up to 60 FPS.

*Framerate Priority option releases on live servers for Xbox One X and PlayStation 4 Pro with the October 9.1 Update.

After rigorous testing, we’re pleased to say that the game performance is extremely smooth and stable, with faster loading and little to no frame drops thanks to the power of next-gen.

Game performance and stability is a priority for us and we want to thank everyone for their support. This is an exciting time for console players everywhere, and we hope to ring it in with you with plenty of chicken dinners!

See you on the Battlegrounds, 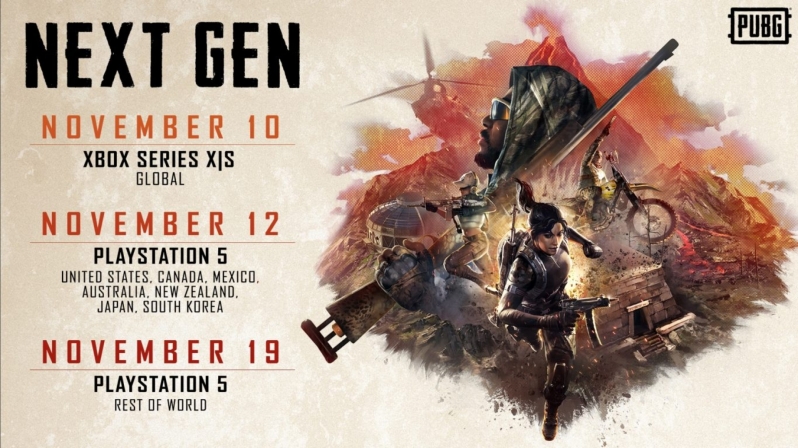 At this time, PUBG Corp has not revealed plans to release full-on next-generation versions of PUBG. Based on the information we have, PUBG will be using last-generation builds to offer early next-generation support on PlayStation 5 and Xbox Series X/S systems.

You can join the discussion on PUBG Corp confirming PUBG's next-generation compatibility on the OC3D Forums.

AlienALX
This game is ace. Never thought I would like it, but been playing it every day now for weeks !Quote
Reply