Player Unknown's Battlegrounds (PUBG) remains one of the world's most popular PC titles, having over 500,000 concurrent players at the time of writing. Within the game's latest PC update, version 6.2, PUBG has gained a new game mode, which pivots the game away from its Battle Royale roots to deliver a more traditional multiplayer experience.

That's right, PUBG's PC version now has a Team Deathmatch mode, and with it comes respawns, and weapon kit spawns. Team deathmatch will be unlike anything else in PUBG, placing teams of eight players against one another in a more confined map than the game's Battle Royale mode.

In Team Deathmatch mode, the team with the most kills wins. The mode will feature seven different maps and games will be split across several rounds, with the first team to win two rounds being called the victors. Each round of PUBG Team Deathmatch will last for 10 minutes, but end early once a team has reached a kill count of 50.

The long-requested Team Deathmatch mode has now arrived! Intense 8v8 FPP fights on 7 different battlefields pulled from your favorite maps. TDM features classic PUBG gunplay and mechanics with all the fun and action of respawning back into the fight. The boost gauge functions differently in TDM and fills by scoring kills and assists, restoring your health after you haven’t received damage for 5 seconds.

The team with the most kills in 10 minutes, or the first to reach 50 kills wins the round, with 2 round wins securing the match victory. 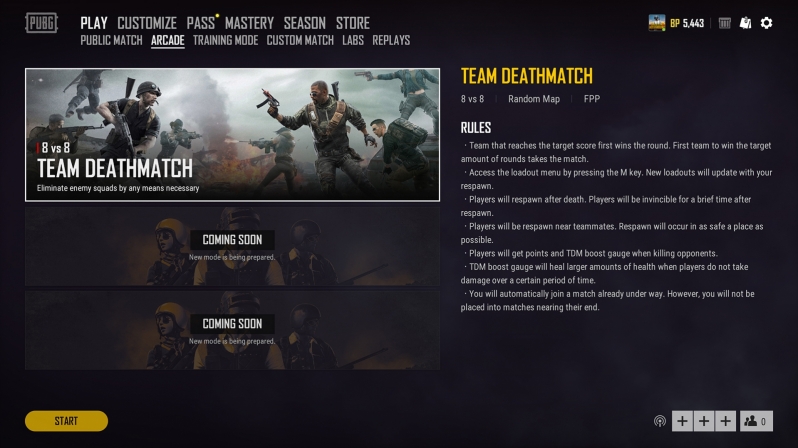 You can join the discussion on PUBG's PC test servers gains access to a Team Deathmatch mode on the OC3D Forums.

Damien c
I might try this, but it depends if they have managed to sort the problem of cheaters out or not.


I know a few friends still play it almost everyday and they have fun, but I get annoyed by being killed and loosing games due to someone cheating.Quote
Reply