Linux gaming is evolving at a rapid rate

Linux gaming is on the rise, with solutions like Wine and Proton allowing Windows games to be played on the open-source OS. With Wine, DirectX 9, DirectX 11, and DirectX 12 games can be translated to Vulkan to enable Linux compatibility. While some games do not play nicely with this method, especially those with strict anti-cheating systems, it has expanded Linux's game compatibility tremendously, providing gamers with performance levels which are very similar to their native Windows versions.

When it comes to Linux VS Windows benchmarking, the YouTube channel Flightless Mango is one that is well worth following. In the channel's latest video, the performance of Rockstar's Red Dead Redemption II is compared across Windows and Linux, with Linux being split between three sets of custom Radeon drivers.

In the chart below, we can see that all Vulkan versions of Red Dead Redemption 2 were able to run at higher framerates than the game's DirectX 12 version on Windows, but what's shocking is that Linux was also able to provide higher average framerates than Red Dead Redemption 2 Vulkan version on Windows. This gave Linux a 2-5 FPS advantage depending on the drivers used.

While these performance advantages are minor, this is a clear sign that Windows game support on Linux is in a strong enough state to be worth considering. Linux will not offer stronger performance in all titles, the performance levels offered by Linux PC is often close enough to their Windows counterparts to be worth ignoring. It is also worth knowing that Nvidia graphics hardware runs worse in Linux under all tested use cases. 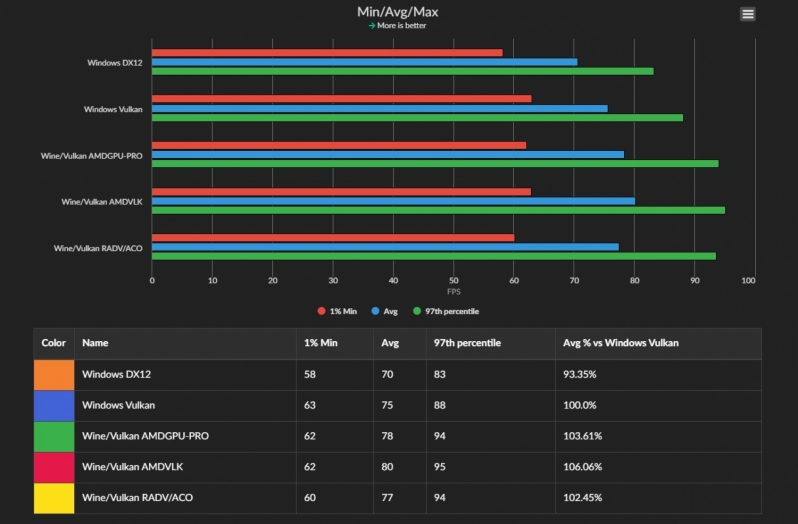 Linux has become a lot more viable as a gaming platform in recent years, so much so that we would now call it a viable gaming OS. In most cases, PC gamers can play new Windows games through Linux on day-1, and that factor can only make Linux a stronger gaming platform in the years to come.

You can join the discussion on Red Dead Redemption 2's PC version can run faster on Linux with Radeon hardware on the OC3D Forums.

jcchg
They should test different card models to come to a conclusion.Quote

NeverBackDown
This is why my laptop now runs on Ubuntu. I don't use it for gaming but I'm getting familiar with how the OS works to prepare for my gaming PC to move to Ubuntu once Linux gaming evolves a little moreQuote

Zoot
I'm a big Linux user - I run Debian on my server. It's really an amazing Server OS, it acts as a Media Server, a NAS, a DNS sinkhole to block adds, a VPN server, and it runs quite a few virtual machines.

On the desktop though, it's a bit of a different story. Gaming has always been finicky, and you often lack software to do certain tasks.

I did use Linux (OpenSUSE, Ubuntu a few other distros and finally Debian) as my daily driver on the desktop until about 2013 but I moved away from it on the desktop mainly because of the lack of games. I tried running stuff in Wine before, but I found it very hit or miss.

If there were more 100% native Linux games I'd consider moving back to it though.Quote

NeverBackDown
Proton has really helped gaming Zoot if you want to look into that more. Seems like it's replacing Wine.

Many games work 100% and some even faster. It's just not enough for me yet personally. I want the OS experience to get a little better but that's just me.Quote
Reply